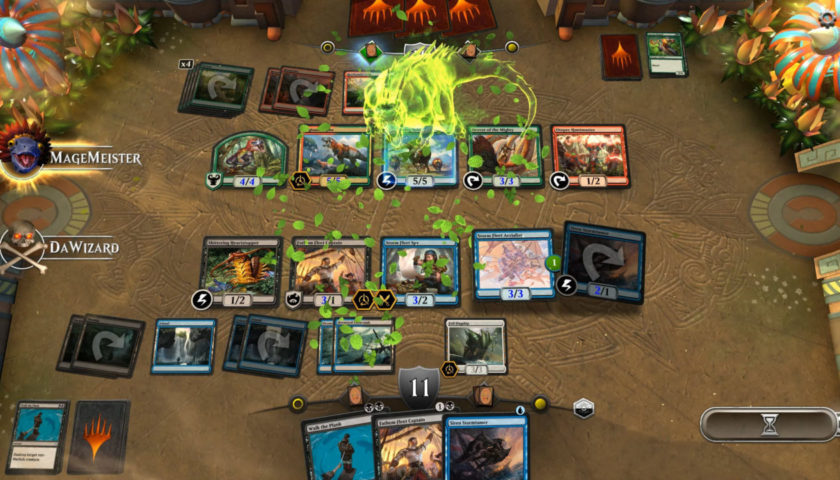 To some, it’s poker in a western saloon, while to others, it’s high-stakes baccarat in a Monaco casino with spies and arms dealers all wearing tuxedos and evening gowns.

To other enthusiasts, however, their card games take on a more fantastical bent, with the table becoming a metaphorical battleground in which they compete with other players in games which can have high stakes yet no money riding on the outcome of each hand.

Computer gamers may have a passing familiarity with card combat games such as Hearthstone, but the reigning emperor of the genre is the venerable Magic: The Gathering, which has traditionally been played with actual, physical specialist collectible cards.

First released in 1993, the card-based Magic game involves players constructing decks of cards representing units, spells, specific abilities and bonuses, then battling against another person. It has also been phenomenally popular, with an estimated 20 million players across the world and the game’s cards translated into 11 languages.

However, Magic publishers Wizards of The Coast have just announced they’re about to launch a new free- to-play computer game which they say will “bring authentic Magic gameplay to gamers, streamers and fans around the world”.

Entitled Magic: The Gathering Arena, the game is being developed in-house by Wizards Of The Coast’s new digital games studio and will have an upcoming Closed Beta soon.

Wizards of the Coast president Chris Cocks said the company had put together a team of some of the best games designers in the industry “who are working to build a digital platform as flexible and expansive as Magic itself”.

“But to make sure we really get it right, we need input from the Magic community, so fans should sign up for the Closed Beta and share your feedback with us,” he said.

While the game has only just been announced, it has been revealed it is being developed initially to run on the Unity engine and will have minimum specifications of an i5, 4Gb RAM, a 1Gb graphics card, and a 64-bit version of Windows 7, 8.1 or 10. While initially a PC exclusive, other platforms are planned to follow in due course.

Wizard of the Coast have also said it will be Magic: The Gathering Arena will be free to download and a free-to-play game, although “players looking to enhance their game experience will have the opportunity to do so through play rewards and in-game purchases, but purchases are not required to access the full depth of authentic Magic gameplay,” according to the FAQ.

According to Wizards of the Coast, their digital studio will be creating “a Magic experience with the full rules and ongoing content support for new card sets, just like the revered tabletop game”.

“The game is designed and built for digital gamers without compromising Magic’s core gameplay. Every element of the game design is focused on an engaging and dynamic experience, true to authentic Magic, to provide players and viewers fast-paced, exciting, and easy-to- follow matches,” their press statement said.

While there is already an online version of the card game (Magic: The Gathering Online), Wizards of the Coast have said the new game will complement it, rather than replace it, and development for Magic: The Gathering Online will continue with new updates, card sets and tournaments – particularly as it already has a digital library of nearly every card printed for the physical version of the game.

Global marketing head Elaine Chase said the future of Magic was about making sure the game’s developers remained true to their “awesome community of strategy game players”.

“It’s making sure that they (players) can carry that amazing Magic experience wherever they go, not only in their Friday Night Magic life, but their everyday life,” she said.

“As the very first game under the Magic Digital Next initiative to improve and expand digital Magic, Magic: The Gathering Arena is an important step toward that future.”

“We want to create the deepest, richest digital card game on the market, and for it to be as much fun to watch as it is to play,” he said.

For more information on Magic: The Gathering Arena, including how to gain priority access to the Closed Beta, visit playmtgarena.com; players are advised they should have at least a basic knowledge of the card game to participate.