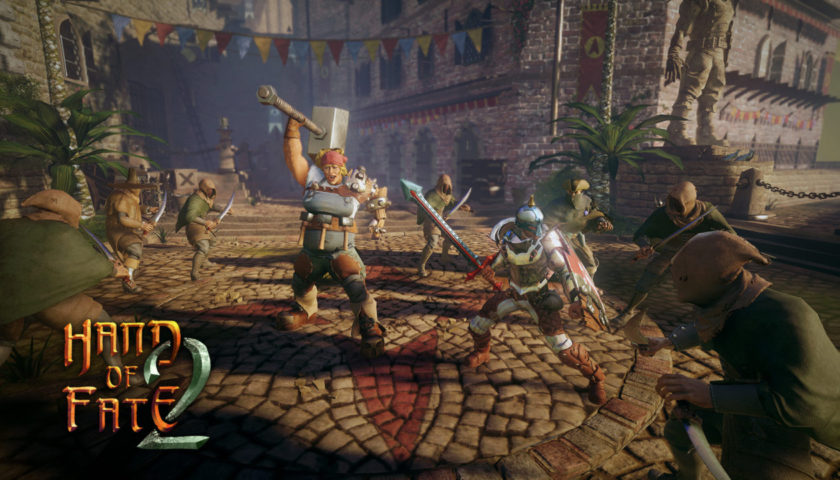 My love for Hand of Fate only grew today with my second hands-on session with the second game in the series. The first time I played HoF2 was at PAX 2016 and I thoroughly enjoyed my time with it, though it did have a few rough edges. Well, I have forgotten those rough edges completely because the build I played today was a smooth as silk and ready to rock the world in a couple of weeks.

With the help of Defiant Development’s Lee May, I dove into an amazing twist on the HoF formula. In this particular mission, the cards were laid out in a massive square. I could explore this square (moving, as always uses food) turning over cards and hunting down four relics that were on the board. Think of it as an “open-world” layout, exploring the wilderness and hunting down objectives. This really made me think about how I was approaching the level as opposed to simply progressing through to the exit point or final boss. Within the level there were also multiple objectives, each rewarding me with cards for my deck and helping to tell the story on offer.

Speaking of the story it seems to be much more prevalent this time around. There are multiple companions that players come across, each with their own entertaining backstory along with the overarching tale that drives both The Dealer and the main character forward. I found taking the time to read everything, even on the show floor of PAX, to be worthwhile and entertaining, with some strong writing on display.

Perhaps the most impressive improvements I noticed, however, was in the combat realm. Last year’s demo the combat stuttered a little and didn’t quite flow. Now, 2 weeks before release, the combat is tight and tasty. There are three weapon classes, finishing moves, combo associated special attacks and a wonderfully responsive control scheme. This is a massive leap forward when compared to the original game and looks to be one of the most impressive features in a game that has me itching for more.

In my mind Hand of Fate 2 can’t come soon enough. It is a wholly unique title that looks like it is has taken the fun, if a little flawed, concept of the original and improved on it in every way. It looks better, plays better, tells a better tale and has a massive increase in variety. Short of a major disaster in the final release, I can’t see this game being anything but a huge success. Bring on November 7 because it is time The Dealer and I had words.