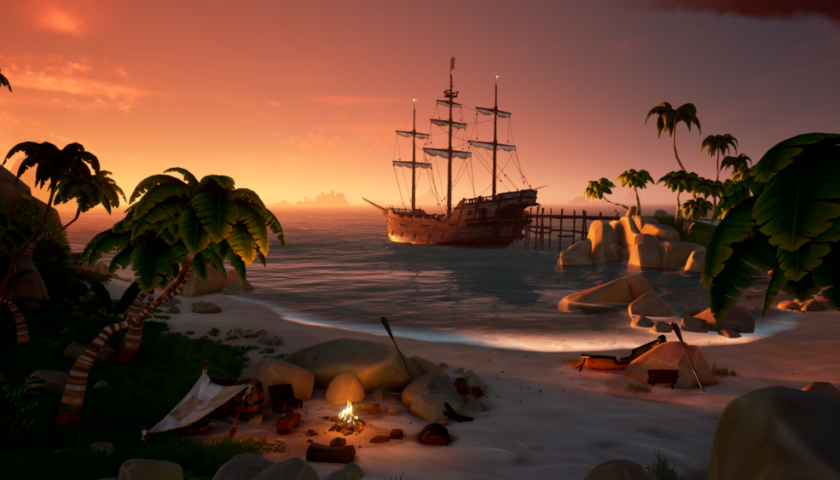 I honestly contemplated writing this piece in pirate theme. You know what I mean, lots of “arrrrs” and “ahoy there” etc. But let’s face it, I would just annoy everyone that read it and the only person it would have amused is myself so I am just going to can that stupid idea right now. But you know what isn’t stupid? Sea of Thieves which, thanks to a rather lovely invite from Microsoft, I got to get my hands on the night before PAX started. From my time with it, Microsoft and Rare could be onto something pretty special but it does come with a few caveats.

For those that don’t know, Sea of Thieves is a shared world Pirate game which involves ships full of pirates doing….well…Pirate things. Swashbuckling, drinking rum, looting treasure, drinking rum, attacking ships and drinking rum. You know the things. It hits every Pirate cliche in the book and it is all wonderfully done. I must also say the game looks great and the graphics ooze that feeling of “this is a Rare game” like nothing they have produced since the very early days of the Xbox 360. My play time saw me joined by four other hearty adventurers as we set off to find a treasure on a distant island. So, as a team, we had to get our ship in order and sail off in the right direction. That meant one of us was the navigator, one on sails, one on the anchor and the other checking the map to make sure we were heading in the right direction. Even when we had some quiet moments on our sailing adventure there was plenty to do. At one point we scraped against a rock so the hull needed repairing and the water needed bailing. We also had to make sure the cannons were loaded and weapons were ready, just in case.

The key to all of this was teamwork. It would have been very easy for one of us to not be on the same page and make life very hard for our crewmates and this is where my biggest worry for the game comes in. Playing with random people on the internet is going to be very hit and miss so I think that if this is a game you are looking forward to then start looking at getting your crew together now because it is going to be an infinitely better game with friends.

To finish off our adventure we all landed on our target island and went looking for the treasure it promised. Sadly while we were on the land shooting skeletons and looking under rocks another team of four came up without our knowledge and pinched our ship. A decidedly pirate-like course of action. So like madmen, we all swam after our ship watching it getting further and further away, our dreams of being pirates shattered by the fact we didn’t lock the car.

That is my story from my first half an hour with this ambitious game and I have the feeling that stories like these will be common upon the game’s release. Sea of Thieves is shaping up to be a wholly unique and entertaining experience that should, all things considered, be a game that stays with players for a long time. Just make sure you can trust your crew when you finally set sail because if you can’t you can only expect rough waters ahead.