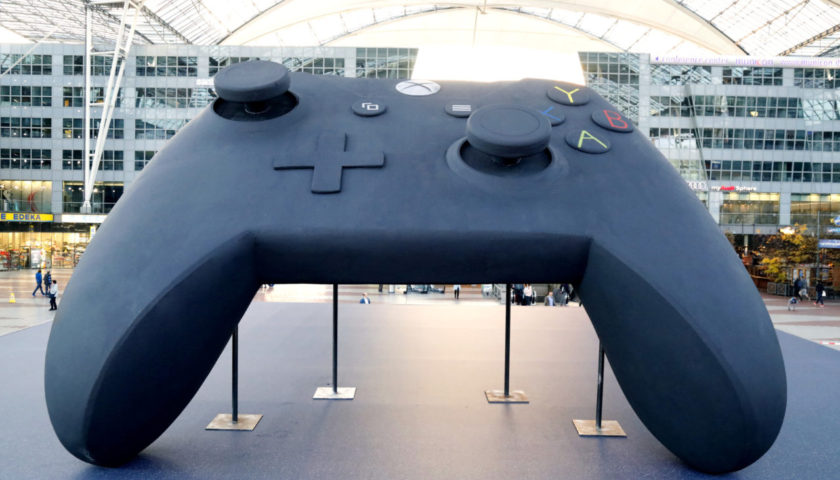 Player 2 Vs the Xbox One X

A big (or not so big as the case may be) shiny new console is always worth a little bit more extra attention so that is exactly what we are going to give the Xbox One X. Noted Sony trophy hound Paul James and Xbox apologist Matt Hewson got together to discuss what they like and what they don’t like about their spanking new systems.

Matt: I know I am not the only one to say this but damn, this is one tiny piece of gear. Significantly smaller than Xbox One S, it makes the PS4 Pro seem huge and the original Xbox One seem like a Mack Truck. It isn’t the flashiest looking bit of gear I have seen, simple and subtle is the order of the day, but it will fit well with just about everyone’s home systems. What more could you ask for?

Paul: I spoke about it in my unboxing video (plug plug), but the X is a striking system to look at. Simplistic, but sophisticated, even the ventilation points look stunning. I’m always a sucker for black consoles, so I’m thrilled by that, and the coolest codename in the world (Project Scorpio) looking back at me adds a really cool edge to it. I love the look of it in my entertainment system alongside my Switch and PS4 Pro

Matt: Simple as pie to set up. Connect to the wifi, enter your Microsoft account details and Robert is your mother’s brother. The new console automatically recognised my portable Hard drives from my old Xbox so my entire library was there instantly. It even automatically began downloading the 4K updates for any installed games that had them. Disc-based games seem to need me to insert the disc to kick off the update but I have a feeling that is just a day one hiccup. In all, it was quick and easy to upgrade from an old Xbox to the Xbox One X and I imagine new users should have no trouble either.

Paul: My internet connection was a pile of the proverbial that day, so the setup process took a bit longer than I’d intended, however the simple setup process was much appreciated. A 700mb-ish update to the console was much less than I had expected. Had to disconnect the old and set up the new power cord, but the same HDMI port made it a very quick setup process. Did I delight in not connecting my old Kinect… maybe a little

Matt: Look it is no secret that the UI has always been the Xbox’s Achilles heel. The latest version is, without doubt, an improvement but it still needs some work done to be considered intuitive. That said, once you have wrapped your head around the UI it starts to make a little bit more sense and it is certainly snappier on the new system. Installing games also takes ages but I find that I get much better download speeds with my Xbox than with my PS4 so when you take into account day one patches I find the install times pretty comparable. Those without NBN are likely to get frustrated though.

Paul: I do love my Playstation, the XMB has always treated me well, and I was quite against the Windows 10 inspired layout of previous versions of the UI, however an update that’s emerged recently has coincided well with the release with the X and I’m certainly a fan of the changes. Everything feels much more fluid, and nothing feels as though it requires a bunch of hoops to leap through in order to get to what you want. There is one thing I hate though, a problem that has existed since the beginning of the console’s lifespan… WHY DOES IT TAKE SO LONG TO INSTALL A GAME?!

Matt: Hot damn some of these games look amazing. Forza 7 is a goddamn work of art in 4k. The cars, the tracks, the beautiful, beautiful weather effects. Assassin’s Creed Origins is another game that every One X owner should have, just to show their friends what this beast of a machine can do. What really surprised me was the improvements made to some of the supported Xbox 360 titles. Fallout 3 looks significantly better than it originally did, I would say just about on par with the PC version (without mods of course). This is a nice bonus I didn’t expect at all. The coolest thing about this is that the Xbox One X pumps out all this pretty without so much as a whisper and with very very little heat. It is clearly a wonderfully engineered bit of gear at the hardware level.

Paul: The Xbox One X purrs, it’s beautiful to listen to… why? Because you cannot hear a thing. As the owner of an early-days 4K TV, that lacks HDR, I’m still incredibly impressed by the way games look on the system. The list of games that are being updated to support the X is growing by the week, but those who are already on board (in particular some of the first parties) are looking incredible. I love my Playstation consoles, I love my trophies, but before I pick up any multi-platform game, Microsoft has given me a reason to think twice about which platform I’ll choose to buy the game on. If someone such as myself (a hardened PS lover) is saying that, then Microsoft has done their job right.

Matt: Without a doubt the games. Every single game gets some benefit from the One X. Load times are better, graphics are a bit crisper and games prone to pop-in have it a bit easier. Games that have had updates for the 4K resolution are simply sublime. I honestly didn’t think it would make that much of a difference. I was wrong. Yes, you need to have the TV to support it but man o man is it worth it if you do.

Paul: The form factor. I’ve spoken about it already, but this console looks the part and fits into an entertainment unit perfectly. It’s unbelievably small given what it’s doing under the hood and looks a treat amongst the other devices I have there. Updates to the UI are great, the 4K updates make an incredible difference to some games (but do carry some negatives, see below), and it’s whisper quiet. There’s a lot to love

Matt: I was hoping that Microsoft would make sharing movies and screenshots easier. Sony’s elegant, yet simple solution is still the high water-mark here. The MS solution is a pain in the arse to be quite honest. I also think MS missed a trick by not including the Xbox Elite controller with the One X. It would have played into the “for the hardcore” thing Microsoft has been saying. I get why they didn’t, it is already rather expensive after all, but it still would have been nice.

Paul: Those game installs and enormous 4K patches might be the end of me. In a non-NBN equipped home (yet), this is a major strike against the system for me. When the PS4 installs games several times quicker, and the patches aren’t as large, it becomes a major point of difference between the two systems.

Matt: This is a console for people that have the TV to support it. If you have the equipment and the money I see no reason to not get this system. Beautiful games are really what this thing does well. I think it was a smart move by Microsoft, a way to keep 3rd parties on side while they scramble to plug holes in their first party lineup and it will appeal to the “core gamers” that have always been the Xbox’s wheelhouse. I question its value if you only have a 1080p set or if graphics aren’t your thing, but otherwise, this is one cool bit of gear.

Paul: The extra year in the oven over the PS4 Pro has reaped incredible benefits for the Xbox One X. The difference in output between the Pro and the X is still subtle enough that the majority of consumers will struggle to confidently distinguish between the two systems, so it does leave me wondering whether or not it will actually tip the scales away from Sony in any way, but it’s a big, bold step forward by Microsoft and I have to applaud them for their efforts. Now, give me some exclusive games please!