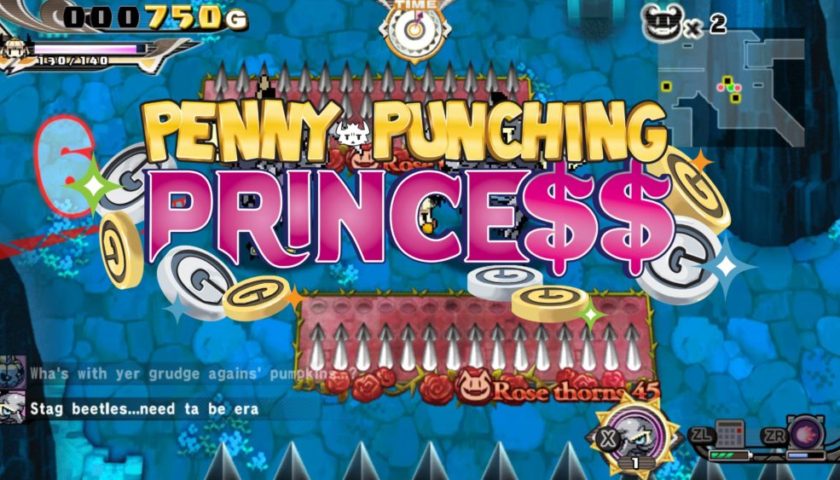 Money makes the world go round right? If you’ve got money there is nothing standing in your way, you can achieve just about anything with unlimited funds. Well I know that isn’t exactly true but it is fair to say that a good bank balance can make life just that bit easier. But the theme of money ruling the world has never really been implemented into gaming, outside of obvious villainous motivations and sim-city style games. Money in games is pretty much only there to buy in-game items that make your character more powerful. But what happens when money becomes the solution to in-game problems? What happens when obstacles are passed through bribery as opposed to fisty cuffs? Well, Penny Punching Princess is what.

Penny Punching Princess is something of a top-down RPG game for the Nintendo Switch. It tells the tale of a dispossessed princess who is looking at retaking her kingdom and getting revenge on the countries that cause her downfall. To do that she personally invades other kingdoms, beating up baddies and avoiding traps along the way. What sets the game apart from the pack, however, is the money system. Money isn’t just used for buying potions and upgrading home base, it is used as a full-on gameplay mechanic to essentially cheat your way past bad-guys.

The way this works is during gameplay the Princess collects coins. These coins can then be used to “bribe” enemies or traps. The way this works is the Left button on the Switch is held down and calculator appears. The player can then target any enemy on the screen, that enemy will have a price appear above its head. The player then enters that price in the calculator and assuming they have enough money, the enemy will be bribed and leave combat. The added bonus is the player will get limited use special attacks from that bribed enemy and they can turn the tide of the battle.

Sound confusing? Well, to be fair it is a little. There are two different control schemes within the game and both aren’t perfect. Touch screen controls allow players to enter the numbers by touching the screen and then touching the enemy, traditional controls can auto-enter the required amount but selecting the right enemy is fiddly and frustrating. This is a shame because this money mechanic is really interesting and unique but it is let down by a clunky control scheme. Money can also be used to purchase some screen-filling super attacks. This is much easier to do in the heat of battle and has been implemented well.

Thankfully, the rest of the game plays great. Upgrading home base, collecting enemy minions and assaulting opposition strongholds is quite entertaining. The game’s story has its tongue planted firmly in its cheek, leading to a few giggles, but ultimately it is fairly shallow. The game looks like a fun 16-bit title and sounds just about how you would expect.  Sprites are as detailed as they can be with the graphics style and the environments are simple yet enjoyable. The sound effects never get grating (which they can often do in these faux 16-bit titles) and the background music is pleasant and never intrudes on the action.

In all Penny Punching Princess is a promising title with a unique idea that is let down by a wonky control scheme. If the devs could somehow improve that through patching I wouldn’t hesitate to recommend this as a great $20-ish title for the Switch. As it is however, the general clunkiness is likely to put just about everyone off. Such a shame that a great idea has been stifled by poor implementation.