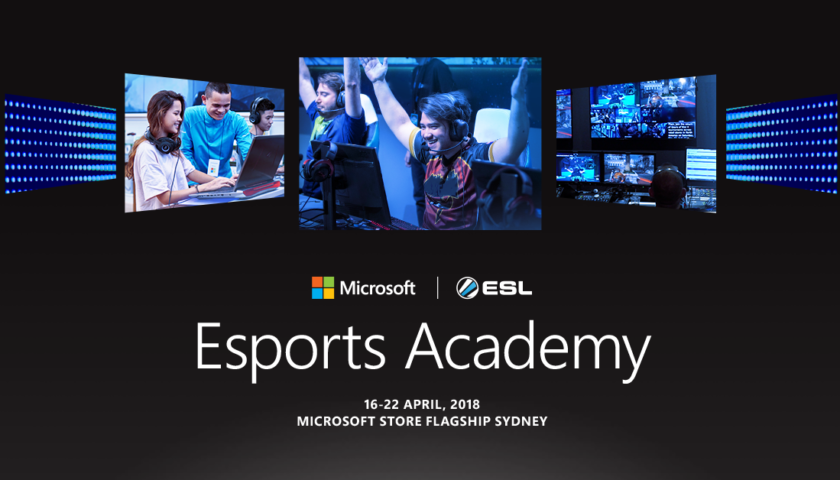 School Time for Potential Esports Stars Thanks to Microsoft Store

Esports continue to grow from a niche sub-aspect of computer gaming into a fully fledged competitive undertaking in its own right – but there’s still quite a bit of confusion around how people can get involved in the field or make the leap from “being really good at a game” to “becoming a professional at it”.

Sydney’s Flagship Microsoft Store, in conjunction with the Australian branch of global esports league ESL, is hoping to give the next generation of gaming hopefuls some insights into the burgeoning industry these NSW school holidays, running a series of workshops from April 16-22 at their flagship store in Sydney’s Pitt St Mall.

The three-hour workshops will give an overview of the industry, including exploring esports as a whole, providing some insights into the career pathways, highlighting the industry’s importance and broadening horizons from attendees.

Attendees will also get first-hand experience with casting, team management and insights into the range of pathways and roles which exist for anyone looking to get into the industry.

The hands-on gameplay element of the event will enable attendees to get direct tips from professional players in order to learn how to play like a pro.

ESL Australia/NZ business development manager Danny Kim said the event would introduce attendees aspects of two elements of the wide-ranging sector, roughly divided into “The Show” and “The Business”.

“Show” elements will cover pro player skills, coaching and management, casting and analysis, while “The Business” will be more about the behind the scenes aspect of professional esports, including career opportunities, networking, and career paths.

Mr Kim said part of the idea of the workshops would be to show people how to avoid the “grind” pathway, in which esports industry folks typically start as aspiring pro gamers and put a lot of time and work into that aspect before gravitating to other areas of the industry such as casting.

Sydney’s Flagship Microsoft’s Store gaming community manager Max Ferfoglia said there was a lot of excitement around video games at the store generally, from casual players all the way through to regular tournament and competition entrants.

“This event is all about bringing the gaming community at Microsoft Store together with some of the top talent in Australia so people can learn more about esports, how to improve their game and also hear about the pathways that exist to get into the industry,” he said.

Laura Scott is an interviewer, host and behind the scenes wizard who came into the industry via a slightly different tack, starting off as a cosplayer before moving into making YouTube videos and from there joining up with ESL – and hasn’t looked back since.

She will be participating in the Esports Academy and said her advice to people looking to enter the industry via a non-professional gaming pathway was straightforward: Be proactive and get involved.

“Get in touch with people, get out there, approach people – and an email, make something and go for it,” she said.

For more information on the esports academy head here: