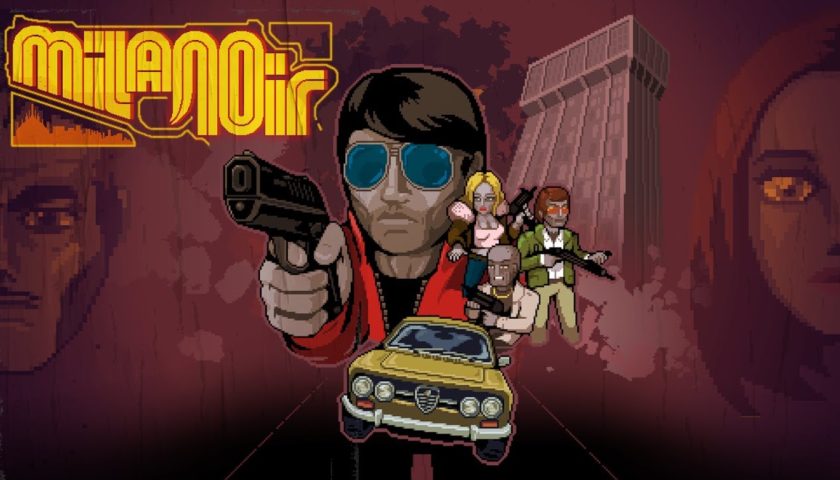 A gritty pixel art 2D shooter set in the beloved past of organised crime where hits are called and your only job is to go in and take them out may sound a little familiar but Milanoir is an indie title which does its best to set itself apart for better but also sometimes worse.

This is Italo Games first game to release after being greenlit on Steam and it delivers a charm that will be appreciated by some fans of 70’s crime family films. You start out as Piero, a young cocky gun for hire working under the thumb of organised crime. Armed with a default gun and optional weapon pickups, you’ll take on onslaughts of enemies to ultimately take out your assigned target for the level.

Combat is clunky at first and it can take a while to master aiming and moving with unrelated controls for those unfamiliar with this style of game. Using a controller with some auto-aim turned on was by far my favourite way to play, as dodging and rolling into cover and away from enemy attacks felt far more natural using sticks and triggers than with keyboard and mouse. I could find a groove this way and often had moments of good fluid movement in combat which I couldn’t manage to replicate using standard PC controls – it’s a good thing there’s full controller support and this also bodes well for console releases.

Levels can get intense when more enemies are on the scene at once and you’ll be forced to make the decision between trying to achieve trick shots off street signs or focusing your biggest threat while remaining in as much cover as possible. There’s a small mix of enemies with different weapons and behaviours which can present stressful situations but adds a nice touch of variety. Even in these sometimes overwhelming moments, death is only punished by a quick reload of your current scene, so getting back into the action for another try is reasonably painless.

Boss battles, however, can feel a bit unfair as there’s often something that isn’t being clearly telegraphed that can help you win, but it’s your job to find that solution. For example, early on you’ll come across an enemy driving a train and it wasn’t until many unsuccessful attempts that I realised shooting the train itself would also cause him damage. While the level of satisfaction of achieving this myself was nice, everything in the game up to this point had led me to believe he would be shielded from damage taken this way so the result was counterintuitive and frustrating.

This isn’t the only case where a little bit more instruction could have made for a much more seamless and less frustrating playthrough. I’m always a fan of games that allow you to figure it out on your own and most of the time in Milanoir this works ok but more than a few occasions there just weren’t enough hints to get you there organically. I regularly found myself needing to stop to come back at another time to look at the problem with fresh eyes or more often, found my solution by accident. Most recently I have given up midway after constantly failing to find the trick for this particular challenge without much feeling of achievability in sight.

Clearly a love letter to films of the time, Milanoir feels like it’s trying a bit too hard to walk in their footsteps and it’s difficult to take seriously. Every character is a clear cliched nod to the genre and the story tries to get quite dark very early on. Your character does and has terrible things done to him but none of it carries much weight. Heavy-handed scenes and dialogue deliver what should be defining moments but they didn’t cause any sort of emotional response. Unfortunately, some of this content isn’t the kind I just want to brush off or laugh at so these moments not only held no weight but were also tonally confusing.

If you want a quick pick up and put down 2D shooter and are happy to ignore the story then there’s definitely satisfaction to be found in Milanoir and although I played it on PC I feel like it would be most at home in its portable form on the Switch. You’ll get frustrated more than a few times with the controls and lack of direction but there are moments where you hit your stride in combat which can feel almost as cool as a 70’s action movie.