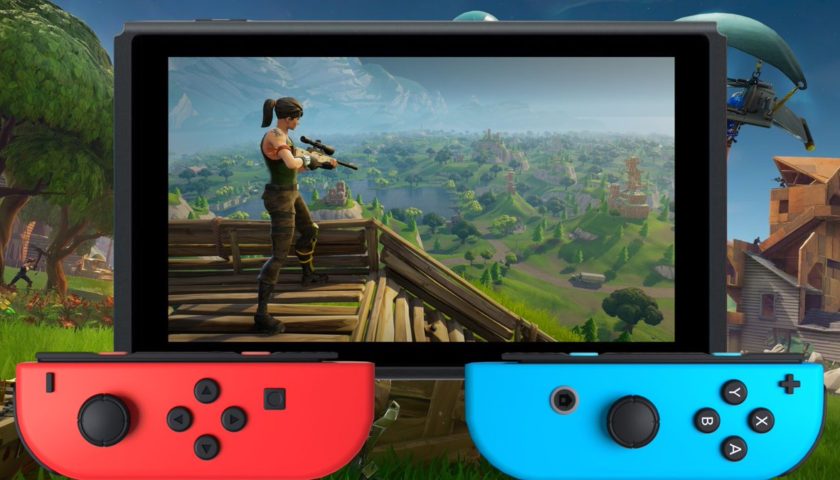 We all knew it was coming, it had been leaked more than just about any other game before E3 (and that is saying something) but we weren’t sure of when it would hit. Luckily for fans it was a shadow drop during the Nintendo E3 Direct. Fortnite has hit the Switch and the millions of players around the can now take their game on the go, with something a little more suitable than a mobile phone.

But how does it play? How does it handle? After all Nintendo’s wonderful little system isn’t as powerful as the ones that Fortnite originated on and it has never been known for online play. Well, I am pleased to say that Fortnite is a solid way to play the super popular shooter. It isn’t the best version of the game, but there isn’t too much wrong with it.

The first thing I noticed was the graphics, clearly there have been some sacrifices made here. Everything looks just that bit blurrier and the draw distance in handheld mode is significantly reduced. This means that sniping isn’t as valid an option in this version of the game and if you are playing crossplay against PC and Xbox players in handheld mode, you are at a significant disadvantage. That said, everything runs smoothly and it is clear that the developers have made the right choices to keep the game running like a well oiled machine.

The other problem with the Switch version is with the controls themselves. Sadly the two thumbsticks for handheld mode just aren’t great for fast-paced shooters. They are just too sensitive and aiming with precision is tough. The other problem I had with the controls is the awkward position of the triggers, I have always found them in a slightly off position and that was particularly noticeable in Fortnite with its shooting based gameplay.  The Pro controller, however, is great and there are no issues.

What was super impressive however was the net code and online play. A game like this needs to get it right and let’s face it, it has never been a strong suit of Nintendo. Thankfully it is all rock solid and runs like a dream. I found no lag issues at all and wait times were no more than 30 seconds, which is pretty much on par for any of the systems Fornite has been released on. It is good to know that the Switch can connect to Epic’s servers with no problems whatsoever.

So Fortnite on the Switch isn’t the best version to play and you will probably want to make sure you are only playing against other Switch players to ensure an even playing field. That being said it works and it works pretty well. Sure some sacrifices had to be made, especially in handheld mode, but essentially this is a fully working, all singing, all dancing version of Fortnite that you can take with you on the go. That is more than enough for the millions of Fortnite fans everywhere and considering the cost of entry is zero, I fail to see where you can go wrong.

* All screenshots were taken from a Nintendo Switch in handheld mode.