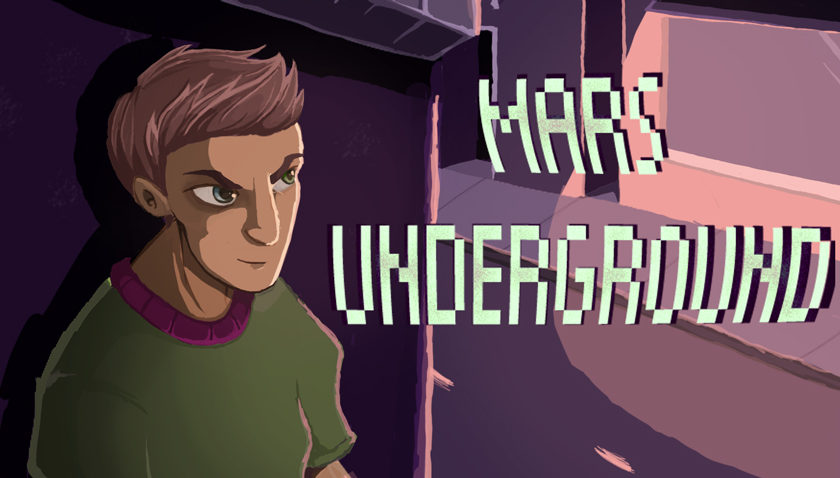 Mars Underground is the first release from Canberra based developers Moloch Media. After a small but successful Kickstarter at the end of 2016, Matt Sanderson has been cooking up a mix of adventure game mechanics with sandbox-style gameplay and sci-fi story elements to create this time looping, puzzle solving, little-sister-insulting world for us to explore. Nearing release on Steam and selected as part of the prestigious PAX Indie Showcase, 2018 is looking to be a great year for Moloch Media and Mars Underground. Player2 writer Anna Rorke spoke to Matt to discuss his successful Indie Showcase placement and his experiences developing Mars Underground.

Anna Rorke: Matt, how does it feel to have your game included in the PAX AUS Indie Showcase?

Matt Sanderson: It’s affirmation that the work I’ve been doing on this game was worth it. After almost 3 years of Mars Underground I’ve certainly had some sself-doubts is this thing I’m doing any good? It feels great to have this positive confirmation and it’s a great motivator to keep going and get it finished and released.

AR: What have you got in store for people looking to check out Mars Underground at PAX AUS this year?

MS: I will be showing off the latest version of the demo, where you can play through a single cycle of the time loop. Of course ,I’ll be there to answer questions and have awkward conversations with anybody who’s interested too! I might show off a few things from later in the game that haven’t been seen before.

AR: This is your first game release, what are some things that surprised you about the process of getting the game completed?

MS: How long everything takes and how hard it is to estimate the amount of time required to do stuff.

The naive assumption I made earlier on was that if I can write, for example, a big branching dialogue conversation in 3 hours one day that I will be able to do it every day. It really doesn’t work like that. What I’ve learnt is an understanding that mental/creative energy is a finite resource and that I will get tired and can only do so much. I’ve found it is impossible to keep going at a steady pace endlessly and that it’s kind of impossible to calculate how long creative work will take.

AR: We love the sense of humour in the game, what can you tell us about something in the game that makes you laugh?

Looking back I think the tone for a lot of the humour in Mars Underground got set right there.

AR: The visual style of Mars Underground takes us back to the 16-bit era, are there any games that especially inspired the art?

MS: I do like those SNES-era RPGs. Earthbound is especially an influence. Old DOS adventure games with EGA graphics are also an influence. There is also admittedly a limitation on what I can work with or pay to have created for me, so the lo-fi looks make things more manageable.

AR: With the release on Steam coming soon, what is next for Mars Underground and Moloch Media?

MS: The first goal is to release on the various PC stores and then get out the Android and iOS versions. I’d love to see Mars Underground on consoles and will be looking at that.

I have ideas for the next game I want to work on and I’m keen to throw myself into making it. The success of Mars Underground is really going to determine what I can do next.

AR: If you get some time away from from the Mars Underground booth, is there anything you would like to check out while you are at PAX AUS?

MS: I’m certainly keen to check out all the other indie games. This is my first time going to PAX so I’d say I’m pretty excited to check out everything there is to check out!