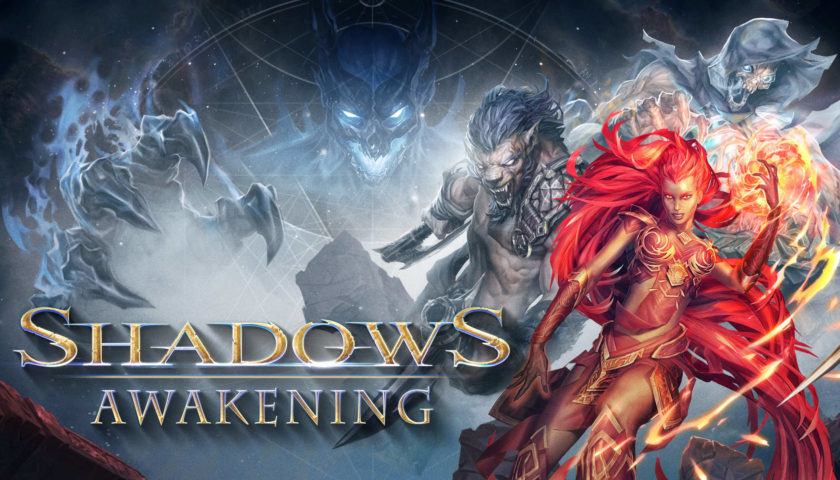 Shadows: Awakening – A Showcase for Baker

Shadows: Awakening is an action role-playing game where you use a myriad of characters to progress through the six chapters of the game’s story, chiefly doing so with a ghostly entity known as the Devourer. The principal attribute of this entity is their ability to bind with the souls of the dead, and it is through these reanimated essences that you are able to take the form of other characters. The game refers to these manifestations as Puppets, a slew of recently deceased warriors, hunters and mages that together comprise a miniature army that is at your disposal.

On paper, there are no missteps in the elements of Shadows: Awakening. Every environment feels rich in detail, conveying each location with a coherent atmosphere and ample beauty. Each of the characters encountered through the course of play were interesting in their own right, and many had their own stake in the story. More than that, there are sequences of dialogue in the game where these souls that coexist inside the devourer engage with one another, yet due to the nature of how character selection works, it’s a synergy that was not present as they manifested in the game world as they could only be present one at a time. It’s an intriguing mechanic in itself, one that introduces a variety of playstyles that can be switched between at the press of a button, but it feels more a case of switching for the sake of spreading skill cooldowns rather than capitalising on any perfect party.

There are a total of fourteen puppets in the game, with the Devourer bringing the full character roster to fifteen. Beyond your initial puppet selection (which locks the other two away for a separate playthrough), most characters are unlocked through progression, with only a few others that will lock other options away. You can have up to four characters active in your quasi-asynchronous party, one of which must be the Devourer, though the rest is usually at your discretion. There are some areas in the game that require you to pick a particular puppet, so as to not upset the dominant faction in the location or to rely on specific abilities the other does not have, but the game does prevent you from switching within your active puppets when it might otherwise endanger you.

Aside from the various regions, the game world is also split into two realms – the physical, mortal realm and the shadowrealm. For the most part, each room has its own inhabitants, structures and style. The shadowrealm is shaped similar to the mortal realm, though there are occasions whereby a barred passage in one may have a way forward in the other. The teleportation platforms, party selection and some special vendors are specific to the Shadow Realm, and there are also some enemies that overlap in that they will be present in both, and may even require you to defeat them in one realm before they will be vulnerable in the other.

There is some minor puzzle solving elements in the various dungeons, which are usually either objects or pulling switches, as well as shifting between realms as a means to get ahead.

The typical staples of role-playing are present with levelling, skill selection, and equipment being part of how you build the strength for your party. Most of the equipment is geared towards a particular class or character, and as you play will collect a lot of equipment that is useful for characters that you have either not unlocked or do not currently have active.

The main attraction of the game is the wonderful narration by Tom Baker, and in spite of a story about treacherous assassins, forces like the Penta Nera, and an abundance of references scattered through sentence after sentence as a slapdash effort to paint the world with a rich lore, it is only Baker’s pronunciation of every fantastic label or faction that shifts the expositions a step toward tantalising delight, but the same voice would bestow gravitas on the recitation of a telephone directory for many a listener.

It’s hard to pinpoint what about the Shadows: Awakening doesn’t work. Maybe it’s that all of the effort that went into world-building which has created such a rich, potentially deep lore has not meant it has successfully been conveyed to the player in a way that makes them feel a part of it. Even playing as the Devourer, it is some time in the game before you are given an awareness of the stakes of your character, or how your character came to be part of this.

With Baker’s crafty architect Krenze pulling the strings, it is framed from the very beginning as a story where you are being kept in the dark, and that there is some underlying plot kept hidden. That continual sense that you are not part of what is happening is not necessarily bad, but without having a true attachment to the stakes, it means the hook is always out of reach. There are other games that have done this, keeping the player in the dark on where things were headed, but have done so with a shift, but they require that initial state of attachment to shift from.

Perhaps the issue is down to luck – the luck to have chosen a starting character of the same class as the next to unlock, reducing the chance to lean on one over the other depending on situation, and subsequently breaking the rhythm of play such that it was fractured in the impressionable stages of play, and never quite recovered through forming a satisfactory pattern.

The real marring factor against the game is that even after so many hours – in excess of forty spent in its world – the most lasting impression is haphazardly backtracking through the exact same environments as quest after quest presented objectives that were quite often in the place you had just returned from. In particular, the requirement to have a quest selected as active before being able to progress an already-completed objective meant further delays again.

It is a shame that such a beautiful game that has had so much effort clearly put into it, fails to deliver a game loop that feels natural or is satisfying to play. It isn’t necessarily a game to pass on, but with the time that even a single playthrough requires, it is an investment of hours not taken lightly.