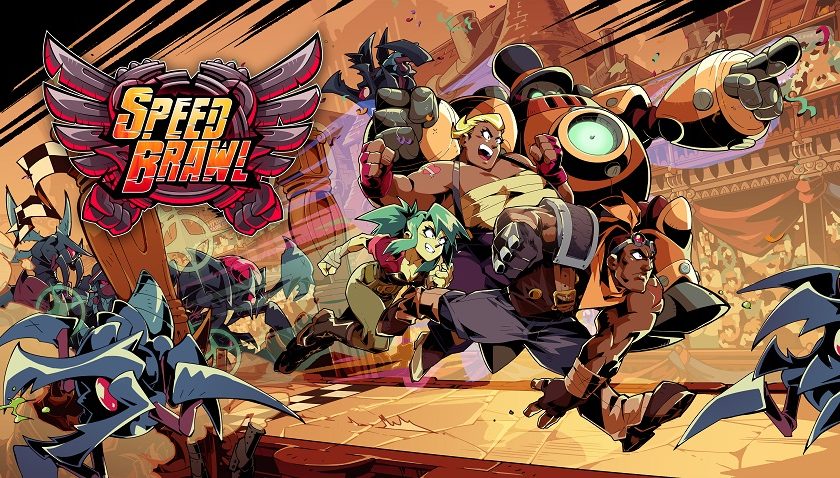 Every now and then you come across a game that does something a little different, something a little out of the ordinary that just works. A new mechanic, theme or even style of gameplay that, once you play it, seems like something so obviously cool that you wonder why it has never been done before.  Well, I am happy to say I have come across one such title, a title that takes the speed and momentum of Sonic the Hedgehog and mixes it with the fisticuffs of Streets of Rage. That game is Speed Brawl and it has taken me totally by surprise.

Set on an alternate Earth, Speed Brawl is a sport that has come about since a massive war destroyed much of London.  Combatants enter staged arenas with the goal of getting from one end to the other as quickly as possible while still beating up all of the enemies in the level. The in-game story tells of a couple of wannabe speed brawlers looking to make a name on the circuit and work themselves up through the ranks. Along the way, they discover that there is more to this Speed Brawling business than a simple athletic competition and that it is being used for more nefarious purposes. So, of course, they seek to find out exactly what is happening in this war-ravaged world. To be honest, the story isn’t anything too exciting. It is presented with still pictures, speech bubbles and the occasional cinematic and it ties the world together without ever really going anywhere exciting. It isn’t terrible, it isn’t great, it is just competent.

What is great however is the gameplay loop. Momentum is key to speed brawl and that is achieved in quite a few ingenious ways. Bosting, swinging on poles, bouncing off enemies and getting big combos all increase momentum which in turn increases combat strength and efficiency. Each level allows for gold, silver and bronze medals to be won, with better prizes and exp for the better medals. Fumbling your way through and button mashing will get you the bronze medal without too many problems but if you want that sweet XP (or fame as the game calls it) boost from the gold medal (and trust me, you do) getting the knack of stringing combat and movement together is a must. Later levels in the game almost insist you master this because death comes swiftly if you are not prepared. Thankfully levels can be repeated after levelling up or getting new gear, making them easier and encouraging multiple playthroughs at the same time.

Thankfully the combat system is just as fleshed out as the movement system. Players get to chose from a range of speed brawlers (6 by the end of the story), each with different combat styles, special attacks and super moves.  Two brawlers are taken into each level, with the ability to switch between them on the fly an essential part of the gameplay. Every combatant has the same basic attacks, dodges and counters but there is a huge difference between each of the fighters. Some are super fast, with lots of light hits for building up big combos, while others hit slow but big, great for bosses and tougher enemies. Knowing which combatant to use for which level can mean the difference between a gold and a silver medal, as seconds count big time. The game actually encourages you to mix up your fighters with a smart levelling system that makes all fighters level up at the same time as well as arenas and challenges that mix their goals, making them suited to one character more than others. The combat its self is immensely satisfying as well. Mixing up air, land and special attacks in a way that not only defeats the many and varied enemies but does so in the quickest way possible is a challenge that will draw you in and encourage you to get better every round.

Speed Brawl also sports an appealing hand-drawn aesthetic that runs beautifully. Granted a 2D sidescroller will never be the most taxing game for systems to run, but given the nature of the title, it was important that the developers nail a smooth framerate. The look of the world is appropriately desolate and industrial, something of a steampunk apocalypse and it never dips into territory we have seen before. It maintains this uniqueness with the brawler designs as well, all of them sporting plenty of personality in their looks. In fact, the only slight problem with the looks is the enemy design, but I guess there are only so many ways “generic poison bug” can be drawn so it isn’t a massive issue.

With Speed Brawl, I was honestly surprised. I didn’t expect to get sucked into the game as much as I did, even forsaking time with games like Red Dead and Assassin’s Creed to play it. It takes a concept that seems simple and builds a wonderfully constructed title out of it. Unique gameplay and a hand-drawn look make Speed Brawl stand out from the pack of standard platformers. I implore you not to miss this one like I almost did, it is something you haven’t seen before and totally worth your time.