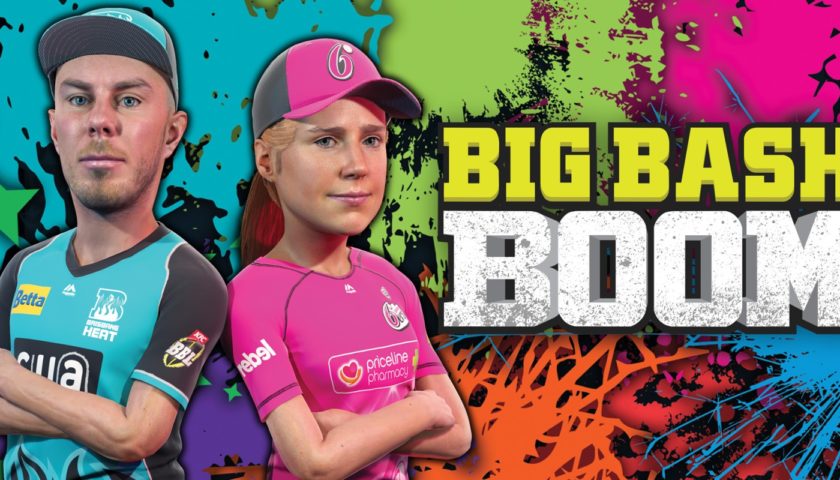 Big Ant has made a name for themselves as the go-to developer for niche sports titles, especially the white-clad world of cricket. The Don Bradman series, followed by Ashes Cricket, were great examples of simulation sports titles. They brought the technical aspects and finesse of the sport into the virtual world creating a great game for Cricket diehards everywhere. But let’s face it, cricket is a tough sport to master and, for some, a very tough sport to watch. That is why Twenty 20 competitions around the world have been so popular. They are bringing the sport to the excitement loving masses. With Big Bash Boom, Big Ant aims to do exactly the same thing by taking their previous experience with the sport, focusing on the Australian Big Bash competition and smothering it with a healthy dose of NBA Jam style action. Can a dose of arcade fun bring such a daunting sport into lounge rooms everywhere?

Well, in all honesty, the answer is almost. This is because Big Bash Boom feels very much like a work in progress. The foundations are there but there are issues that hold it back. Most of these issues are forgivable and don’t get in the way, but they add up and leave a little frustration in their wake. The most notable issue is the lack of modes and tutorials. Cricket is a difficult game to grasp and the same applies with a virtual recreation, even in an arcade title such as this, so not having a tutorial seems to be a bit of a cardinal sin. I picked it up fairly quickly, but I feel like that is due to my extensive experience with the previous Big Ant cricket titles and I think people who haven’t played those games, are going to struggle for a little while. That said, it won’t be too long until the controls make sense to new players and the pretty well-balanced difficulty levels only help to make it more welcoming. The lack of different modes is somewhat more concerning. There was an opportunity here to do something a little different with cricket, something along the lines of what has appeared in NFL Street or even the world tour mode from the most recent NBA Jam, but sadly that wasn’t to be. Instead, there are the basics, Casual (or exhibition) and Tournament. That’s it really. There is a team editor and the ability to unlock in-game celebrations using money earned for playing well, but really it is just the absolute basics here.

Thankfully though the gameplay its self is a good bit of fun. Once the controls have been mastered the game successfully mixes the nuances of real-life cricket with arcade insanity. Swinging for the fences is a highlight and quite the skill to master, based on the incoming ball’s movement and angle. Timing and foot placement are essential to clearing the boundary and not sending the ball straight up into the air. There are four different shots that you can play but in reality, aggressive and loft shots are about all that is required, which is fine due to the nature of the game. Looking for smart singles is not going to get a win in this title. On the bowling side, each bowler has four different types of bowls, all of which correspond with a face button. One button press starts the bowling motion and a second release the ball. Time the second button press correctly and the ball will zip in at a super speed, miss time it and a no-ball will be called. It is a simple, yet quite deep system that is just as entertaining as batting.

The game is littered with the ridiculous, as to be expected from an arcade title striving for that NBA Jam feel. The commentary is funny in a “jeez my dad would make that joke” kind of way and while it gets repetitive after a while, there is still quite a bit to listen to that brings a smile to your face. In game power-ups exist, 3 different styles for both the bowling team and the batting team, and they can be used to leap ahead or catch up quickly. These power-ups are earned by playing well and once activated provide boosts such as stronger batting power, double runs or better fielding. Each power-up, when activated, is initiated with a cool little animation that refers to some famous pop-culture moments. Animations inspired by the likes of Doctor Strange and Dragonball are a fun addition to to the game and it adds a nice bit of personality to proceedings.

Graphically the game is a bit of a mixed bag. I love the style they have gone for, with the cartoony look suiting the title wonderfully. Player’s look suitably like their real-life counterparts and they have made the transition from the real to the toony well. Sadly though there are graphical and animation glitches everywhere. From catches being dropped even though it was called out to the ball strangely defying the laws of physics and shooting off in a random direction. There is nothing here that a few patches can’t fix (and there has been one patch already that has made things much better) but it still feels like a game that has come out of the oven a month too early.

The game is at its best, as all games of this nature are, in two-player mode. Online is stable and functional but the real fun is playing on the couch with a friend who just happens to be within friendly punching range. I can see this being a family favourite, especially if the family takes a little time to learn the game properly. The real-life Big Bash, for my family at least, is a competition that brings us all together and I can see this game doing the same thing. I am always down for more fun titles to share with friends and Big Bash Boom certainly fits that bill.

In all, Big Bash Boom feels like a noble first effort in the arcade genre for Big Ant. Issues with graphics and a lack of game modes are pretty well countered by some solid gameplay and a nice sense of humour. The inclusion of full playing rosters from both the men’s and women’s leagues is wonderful and playing with friends a real treat. I feel the game is too expensive at retail (with RRP $90) for what’s on offer, though with a small dev team and target market, I realise why this is the case. All that being said, I think that people that love the Big Bash and are happy to lash out will find a lot of fun here. For everyone else, well you might just be better waiting for the next entry to iron a few of the issues out.