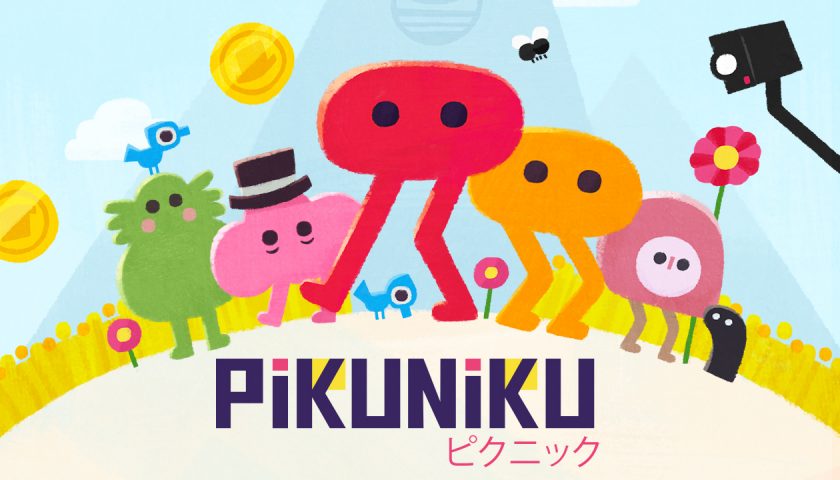 Packed with whimsy and surrealist humour, Pikuniku is a delightful puzzle exploration jaunt in a self-proclaimed delightful dystopia, despite being a little light-on in the gameplay department.

Set in a bizarro world inhabited by weirdly-shaped blob people and various sentient objects, Pikuniku touches on Orwellian elements of constant surveillance under the watch of the sickly sweet Sunshine Incorporated. Beginning with an infomercial-like cutscene, you’re introduced to the leader of Sunshine Inc. who explains that they offer free money in exchange for letting their robots pick up “garbage” unhindered. After a short while, following a mishap where your playable ellipse with legs is wrongly imprisoned, you learn that the “garbage” collection is more sinister than you’re led to believe. From here, you do what you can to help the locals out and join an uprising of adorable proportions.

Pikuniku features the basics of a 2D platformer, giving you full control over your leggy protagonist, along with the ability to jump, roll, grapple, and kick your way to a better future. It’s all very simple and easy to control, although I’m not a huge fan of the lack of jump sensitivity; all jumps reach the same height regardless of how long you hold down the button. Pikuniku isn’t about tight platforming, though, so this doesn’t present any genuine issues beyond a floaty feel to the controls. Instead of having precise control over your character, every basic movement adds to the humour, as the balance between their lanky legs and stout body is askew, flipping hilariously in the air following every jump. Plus, Pikuniku imparts the lesson that nearly all problems can be solved by kicking them. Your bread’s jammed in the toaster? Just a good ol’ roundhouse kick will fix it up nicely!

Doing away with many recent games’ philosophies of tighter controls, more frames, and hours upon hours of content, Pikuniku favours entertaining interactions between its characters, of which there are plenty to enjoy. Early on in the first village you visit, one of the residents challenges you to a game of their invented sport, which is essentially basketball, but you kick a watermelon into a basket. To divulge more of the many silly encounters in Pikuniku would spoil the hilarity and spontaneity of these moments, but trust me that they are varied and all equally as entertaining. What really elevates these interactions is the witty and particularly millennial gallows humour brand of writing, sans complete grammar and punctuation for comedic effect, akin to what you would see on Twitter and Tumblr. In the first few minutes of the game, you encounter a friendly ghost who warps the classic Zelda line “It’s dangerous to go alone, take this” to eschew giving you anything tangible, instead offering you their full moral support in the absence of a spectral being owning any worldly possessions. This highly self-aware and occasionally morbid sense of humour is delightfully endearing and is why Pikuniku is such a nice game to chill out with.

However, I had the nagging feeling that Pikuniku’s puzzle sections, while largely clever in making the most of the game’s limited mechanics, were intermissions in between the good stuff – spending time discussing silly things with other characters. Pikuniku is varied enough to sustain its several-hour length, but the puzzles didn’t quite feel involved or stimulating enough to drag me away from hilarious moments of surrealism like talking with a leaf about the intricacies of washing grated cheese off dishes. Conversely, I appreciate that while Pikuniku’s puzzles didn’t fully grip me, their relative ease and simplicity meant I was never bogged down for long and could move swiftly to the next goofy moment. You are rewarded for exploring beyond the main path with Easter eggs and optional puzzles that do offer a bit more challenge, but nothing that will lead to controller-through-the-window frustration.

Curious to understand its meaning, I found that the title Pikuniku is a variant on “pikunikku (ピクニック)”, a Japanese word meaning “picnic”. When viewed from this lens, Pikuniku makes perfect sense. This isn’t a meaty game by any sense; it’s a fun little Sunday afternoon picnic with friends who are a joy to be around.