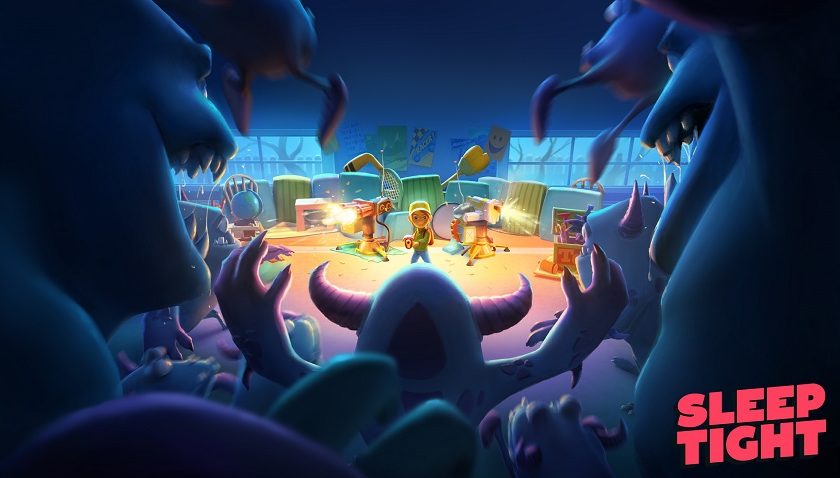 Monsters are out to get you.  Without fail once the sun goes down they come for you.  The only option open to you is to hold them off and survive until day breaks.  Luckily, you have discovered a weakness that will allow you to fight back and stop them.  Armed with dart guns and turrets you can take the fight to the monsters that come at night, and all kids know how to build pillow forts for protection.  The real question is, how many nights will you be able to withstand their advances before you finally succumb to the monsters.

Sleep tight is a fun hybrid base building twin-stick shooter developed by We Are Fuzzy. The game has you fending off hordes of monsters as you try to survive through as many nights as possible.  Manage to survive until dawn and you are rewarded with resources that you can use as you see fit to survive another night.  What you choose to use these resources on is entirely up to you, though just like a normal day, you only have 8 hours worth of sunlight and thus 8 suns to spend.  If you are the do-it-yourself type of person, you might want to spend your suns upgrading you dart gun to unleash more death and destruction on the monsters that plague your nights.  If you prefer to build your way to victory you can spend your suns on turrets and fortifications to hold off the monsters for you.

Be warned, thinking that you can just build the turrets and fortifications and let them do the work for you is a path to failure.  Every attack from the monsters will damage them, leaving you to find the right balancing act between repairing the structures you have and upgrading them to handle the more powerful monsters you will encounter the longer you last.  With only 8 suns granted every morning, it is a delicate balancing act, especially when you need to use the suns to buy ammo and health as well.  Upgrades are unlocked by collecting the ‘stars’ that drop from vanquished monsters and the research options are able to customise and advance your own play-style.  Once again balance is the key to surviving the next night.

As you survive night after night you will unlock extra characters to use for new play-throughs.  These different characters, apart from having their own witty one-liners (that you will hear multiple times the more nights you survive), have different weapons or skills to help them last longer in the game.  What is interesting is the way to unlock these characters is to play the game in a certain style.  For example, there is a character that specialises in an engineering type play-through, but in order to unlock her, you have to go three rounds without firing any darts yourself, letting you turrets decimate the monsters instead while running around picking up all the dropped stars.  By putting new characters behind these types of challenges you are really pushed into experimenting outside of your normal play-style.

Playing on the Nintendo Switch the game ran smoothly no matter how many turrets I had concurrently blasting monsters and most of my playing was in hand-held mode due to the fact school holidays were on and the kids had commandeered the TV.  The layout and character models were clear and colourful during the daylight hours and suitably dark during the nightly fighting, even if the room itself was far too clean to ever be the room of a child, or maybe that is just the way my children are.  It is also a little odd that all of the different characters have rooms that look exactly alike, but that is just me nit-picking.  Either way, it is the perfect little game for commuting or when you only have a short amount of time to play.  Load it up, blast some monsters and put it away until you get some more free time.

The only one gripe I have with the game is that it would make for an excellent co-op session.  Being able to play with a friend, either online or local co-op would make for some interesting strategies, especially if both players are used to different play-styles.  If I could wish for anything from the developers it would be for a “Sleep Over” DLC that allows two or more players to take on even more monsters together.

Despite these few minor issues, and they are more personal issues than major flaws in the game itself, Sleep Tight is a fun little shooter that will keep you entertained.  Without any other game modes it may be up to just how much you want to challenge yourself that will keep you playing, but for those that enjoy the base-building shooter genre there will be plenty of time played to see just how many nights you can survive before the monsters overcome you.  Although, I do wonder just when these kids get any actual sleep, or perhaps they are powered by an infinite supply of energy drinks…