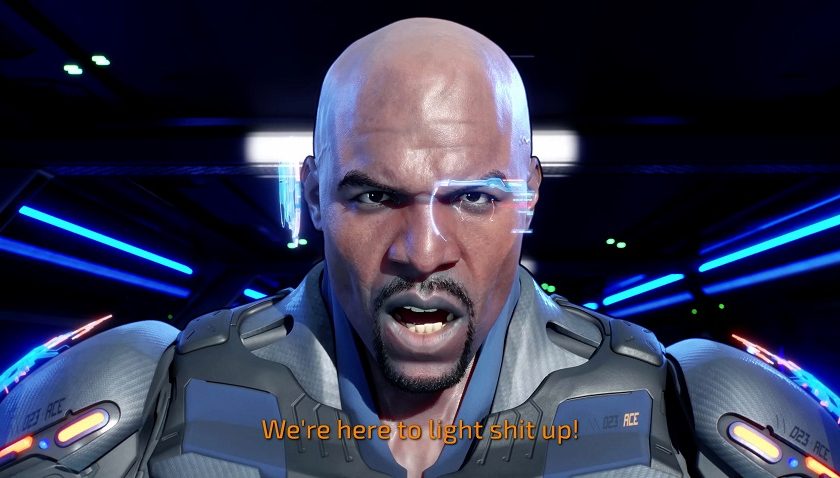 Crackdown 3 Single Player – Terry is not your Saviour

Crackdown 3’s single-player campaign feels like an open-world game from a bygone era. Stripped away of much of the substantial side-content modern exponents of the genre are known for, Crackdown 3 focuses on solely two things. The first: punching, shooting and blowing stuff up. The second? Making us jump around and collect shiny orbs like the digital Pavlovian dogs we are. Your mileage will vary wildly depending on your fondness for collecting things and basic, repetitive combat.

Beginning the campaign prompts you to select an agent to play as, offering a small range of characters to choose from and many more who can be unlocked and interchanged throughout the campaign. Each potential agent is equipped with unique modifiers that impact the way you play, such as a bonus 10% increase in experience gained for a particular skill. Once you unlock the first supply point, areas that function as fast-travel locations and a place to change your loadout, you can freely swap between unlocked agents to take advantage of their bonuses. Honestly, I’m not sure why you would play Crackdown 3 as any character other than Commander Jaxon, played by the charismatic actor Terry Crews. If you add Crews into any game as a playable character, you damn well better believe I’m going to play the entire game as him. So I did.

Crackdown 3’s fairly generic story is introduced via a CG cutscene, where we see Commander Jaxon addressing his fellow agents in an over-the-top, campy monologue delivered in a way that only the ever-affable Crews could get away with. These agents are headed towards New Providence, a utopia-turned-dystopia by the evil corporation TerraNova, to save its inhabitants and investigate the evil science stuff the bad guys are doing. As they approach their destination, the agents’ fleet-ship is blown out of the sky by a green EMP-like blast, completely frying the crew to a fossilised crisp – including Jaxon. However, your character is rescued and revived, Mass Effect 2 style, by a rebellious woman named Echo who wants to stick it to TerraNova.

Forging a path to the big bad at the end, Crackdown 3 offers a menu with a hierarchy of each boss and their henchmen who you need to flush out by doing a fixed amount of their themed missions. This is presented in a way similar to the Nemesis system in the recent Middle-Earth games, or the web of Cultists in Assassin’s Creed: Odyssey – minus any of the depth and intrigue these other games feature. Crackdown 3 instead shows each main baddie on a flatly-designed chart, offering no sense of discovery or satisfying progression towards the end goal.

Aside from the introductory cutscene, Jaxon speaks very little, with Echo and the returning dulcet-toned Agency Director character serving as the pseudo-narrators for the majority of Crackdown 3’s events. These two characters parrot faux-tough-guy dialogue incessantly throughout the roughly seven-hour adventure, despite my wishes for them to shut up. Disappointingly, this relegates Jaxon to semi-regular one-liners scattered sparingly throughout the game. This is likely because of the ability to swap between different agents, and I understand the logistics and costs associated with hiring an actor of Crews’ calibre would be significant, but I reserve my right to be disappointed in Crackdown 3’s lack of Terry.

However, you’re highly unlikely to be playing Crackdown 3 for its engaging narrative, instead wanting to get around some large scale action. My first foray into combat felt weak; hand-to-hand combat lacked oomph while shooting weapons available in the early-game packed the stopping power of a water pistol limply dribbling water onto the ground. Later on, you’ll find weapons that are more satisfying to wield, but even then you’ll be lamenting the fact that not all weapons are made equal. After defeating an early mini-boss, I picked up a laser beam weapon with incineration power, tearing most enemies to shreds within seconds. Unfortunately, very few weapons rivalled the laser in terms of usefulness, meaning I stuck with the one weapon for almost the entire game – most other guns felt weak in comparison, meaning there was no thrill in discovering and using new weapons. Crackdown 3’s combat only begins to show slight signs of depth towards its conclusion, once you’ve gained more abilities and can punch and slam your way through waves of enemies. Other than this, combat is a repetitive exercise in locking on to various foes, holding down the right-trigger until they die, and repeating the process until you complete each cookie-cutter, homogeneous mission. The boss battles aren’t much better, either – each uninspired encounter requiring little in the way of tactical variation.

Aside from the combat, Crackdown 3 employs a significant amount of light-platforming, with an emphasis on quick vertical movement. From the beginning of the game, you’re directed to collect bright green orbs placed everywhere in New Providence which increase your agility, therefore adding the ability to air-dash, double jump and so on. Other coloured orbs are collected through combat and level up your fighting abilities. My issue with this method of progression is that it feels forced and unnatural, forcing you to repeat basic actions ad nauseum to powerful enough to take on the next task. Annoyingly, this prevented me from doing some of the optional propaganda tower takeovers because I couldn’t jump high enough to scale them until I collected more agility orbs. Just let me show off my platforming skills forged in the fires of years of playing Mario games, Crackdown 3!

However, Crackdown 3’s sense of verticality and scale did make for some fun moments, where I needed to keep moving upwards and sideways to survive enemy fire. In fact, if it weren’t for Crackdown 3’s zippy movement, there would probably be scant else to keep you going through the brief single-player campaign. Scaling the propaganda towers I did have enough arbitrary agility points for, I had a good time figuring out which platforms I needed to ascend next and planning my approach to the top. Checkpoints are pretty frequent – which is also true for all of the game’s missions – so missing a jump and falling to my death was rarely much of a setback.

Visually, Crackdown 3 looks crisp on an Xbox One X, with New Providence’s brightly neon coloured vistas popping out in its mildly cel-shaded stylings. Conversely, Crackdown 3’s soundscape is extremely flat. Exploring New Providence yields very little in the way of ambient noise, and the excruciating back-and-forth between Echo and the Director feels forced as if it’s there merely to fill in the awkward quietness of the game. Occasionally, usually during bigger battles, you’ll be treated to some catchy cinematic hip-hop beats, but it’s otherwise a barren auditory experience.

The best open world games excel in part due to their variety, the ability to take things at your own pace, and a smorgasbord of side activities to participate in separate to the main action. Whether you choose to engage in these side pursuits such as bowling or poker is entirely up to you, but it helps to create better lived-in worlds and to break the monotony of a one-note rhythm. This is where Crackdown 3 irritates me; it’s always action, always happening, and always pushing you into the next thing to blow up or kill. It is physically impossible to walk 100 metres and not be shot at by someone and commencing a firefight. Its action is serviceable, but I just wish that there was something else other than the dull time trials to relent on Crackdown 3’s exhaustingly non-stop pace. There’s no room for story or characters to breathe and become more than a tired “overcome the evil dystopia” cliche. Screw bowling with Roman, I want to go bowling with Terry Crews! For an open world game, Crackdown 3 may as well just be a linear action game, as its world only exists for you to run headfirst into battle after battle against similar-looking two-dimensional pantomime enemies.

In fact, if Crackdown 3’s content was toned-down a touch, it would be an ideal introductory open-world game for a younger audience, much in the same way The Simpsons: Hit and Run was for me before I was old enough to play the Grand Theft Auto games. Crackdown 3’s moments of bloodiness don’t add anything, and its utterly uncreative use of profanity reeks of a desperate attempt to make its dialogue sound more “mature”, but generating the opposite effect.

There’s no harm in diving into Crackdown 3 if you have Xbox Game Pass, and achievement hunters will get their dopamine fix, but there are better open-world games to spend your time with.