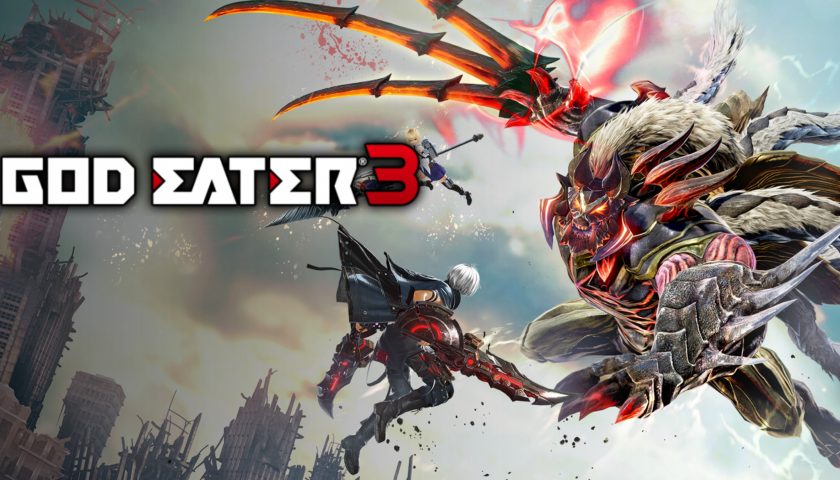 The ‘Monster Hunting’ genre exploded in popularity over the past decade as Capcom’s titular series was joined by the likes of Toukiden, Soul Sacrifice and Freedom Wars. Once again throwing their hat into the ring, publisher Bandai Namco has this time partnered with developer Marvelous First Studio to create God Eater 3, their latest foray into the space.

Despite some dalliances with Monster Hunter over the years, for someone just jumping into the series like myself, God Eater 3 can be somewhat overwhelming to begin with, due to a fair learning curve and an abundance of proper nouns being thrown at the player. God Eater fans will no doubt feel right at home with much of the gameplay carrying over from previous entries, bar a few additions to the battle system which are explained through tutorials when required by the narrative. While my first few sessions necessitated some revisiting of said tutorials to refresh on controls, I soon grew more comfortable and confident. The plot of God Eater 3 concerns the plight of a group of AGEs (Adaptive God Eaters), fierce warriors who are kept in shackles due to their prowess and only unleashed to defeat Aragami, grotesque monsters who roam the landscape bringing death and destruction. After their home Port is destroyed, they soon become entangled with a Caravan carrying mysterious cargo which will change their world forever. In many ways, the narrative of God Eater 3 feels like a playable shōnen manga which should go down a treat with its target audience.

Once I had my bearings, it became abundantly clear that despite moving away from its handheld roots, God Eater 3 still bears many hallmarks from its origins. While plentiful, missions are generally short and take place in rather small areas with scant ability to explore, design choices that makes sense on portable platforms with limited specs but stick out on the more powerful hardware provided by the PC and PlayStation 4 where longer play sessions can begin to feel repetitive. In many ways, God Eater 3 feels like a game better suited to the Switch and I’d strongly encourage Bandai Namco to assess the feasibility of such a port.

Where God Eater 3 satisfies most is its combat which kept me coming back for more. Earlier missions can be completed without much emphasis on technique or skill but it is soon made clear that weapon selection, positioning and item loadout all play a vital role in success, especially when encountering some of the fiercest enemies the game has to offer, the Ash Aragami. Reading enemy animations to avoid attacks or targeting particular parts of their body to disable offensive or defensive capabilities amounts to some of the most enjoyable gameplay on offer in God Eater 3 and will please fans of the genre as well as those willing to overcome the learning curve to reap such rewards. Unlike its contemporaries, God Eater 3 allows players to switch seamlessly between melee weapons, guns and a shield which encouraged me to vary my playstyle often rather than settle into a routine. In some instances, I found myself supporting my AI companions rather than the other way around which is made possible by the fact that they are quite competent, frequently taking care of smaller foes while I scrounged around the map for items. A distinct emphasis on speed and a robust dash ability ensure that even when an Aragami makes a mad dash across the map to recover some health, keeping up with them is in no way overly cumbersome.

Another facet of God Eater 3 that kept me churning through missions were the crafting and upgrade systems. New weapon blueprints are unlocked upon completing missions, with some requiring certain conditions be met, no doubt to increase replayability. In practice, this ensures that after almost every mission, some incremental enhancements can be made to equipped weapons and abilities. The frequency with which weapons can be upgraded or crafted means that switching weapon types is highly encouraged and feels far more rewarding compared to sinking a lot of time and energy into starting weapons. This isn’t to say that becoming extremely proficient with a single weapon type isn’t a viable strategy, but the careful spacing of blueprints and upgrade material distribution gave me the distinct impression that the developers wanted me to experience the full range of the battle system via loadout experimentation. I generally prefer faster weapons in action-heavy games but suddenly found myself drawn to some of the slower, heavier hitting options available which suggest to me that perhaps God Eater 3 balances attack speed with damage output better than some other titles I’ve played.

Despite a fresh start with Marvelous First Studio at the helm, I’m not convinced that God Eater 3 is going to massively expand the audience for the series in the same way Monster Hunter World did for Capcom. It is an extremely competent entry to the genre but still falls back on some handheld design principals that I would have liked to see it shed in favour of larger areas to explore and more varied mission types and goals. If you’ve been on board since God Eater on PSP or enjoyed the more recent God Eater 2: Rage Burst, then it should go without saying that God Eater 3 probably deserves some time in your gaming schedule this February.