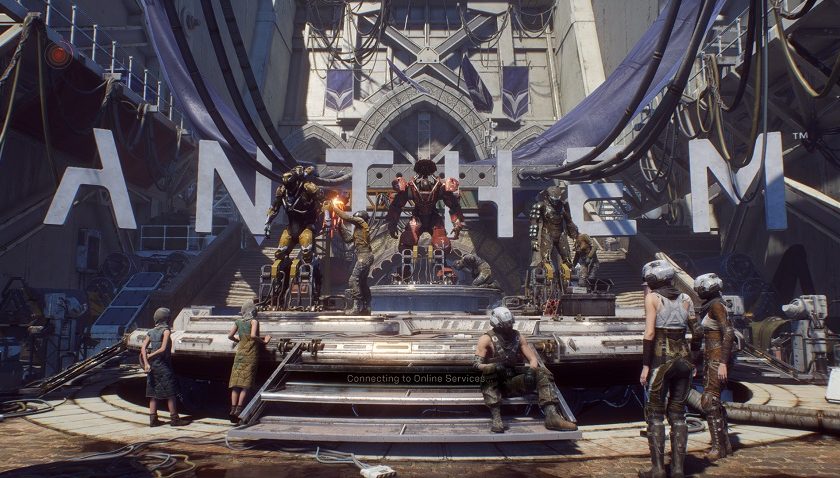 Let me say this first. Anthem is big, really big. So big in fact it would be impossible to review it over a weekend. So I am not. Instead, I am just going to talk about my first ten hours, which coincidentally is the amount of time I got to play since receiving my review code. This is hardly going to be an exhaustive review or deep critique of the game, more of a jumble of thoughts and feelings based on my time so far.

The first thing I noticed was how good Anthem looks. Granted I am playing on a high-end 1080 powered PC so I expected it to look good, but even then I was impressed. The world is surprisingly detailed in the most amazing ways. The Plants, wildlife, environments all show some tremendous graphical prowess. Oh did I mention the waterfalls? Best video game waterfalls ever and that is a good thing because if there is one thing Anthem has an excess of, it is waterfalls.

But as I found out in game, the waterfalls are rather useful. A huge part of the game involves flying around the landscape in a pimped out suit of armour called a Javelin. These rocket-powered exoskeletons all have the ability to fly, but overheating is a problem if flying for too long. Luckily a quick dash through a waterfall and the heat is gone. It is actually a rather clever way of subtlety guiding players around, encouraging them to detour via some falling water to enable long periods of flight and at the same time pointing players towards the next goal. The act of flying itself is highly entertaining and the ability to hover and reign down glorious death on the baddies is a real treat. Bioware has done a magnificent job in honing these areas of the game, creating something unique to the genre in the process.

The combat, however, is a bit of a mixed bag. The gunplay feels tight and certain weapons feel quite satisfying. The Shotguns and Marksman rifles are especially tasty death dealers in most situations. Sadly though some weapons feel quite underpowered. The Han Solo inspired pistols lack any real kick or power, meaning there isn’t much reason to use them and the sniper rifle, while appropriately powerful, is made somewhat useless by the frantic nature of the game. I am not underselling the frantic nature of the game either. It is a riot of explosions, lightning bolts and living fire. It is quite often just too much for a normal pair of human eyes to keep track of. I often found myself wishing for a clear line of sight, but thanks to the amazing pyrotechnics show (which admittedly looks quite good) that was almost impossible.

Mission design is also a bit of mixed bag. Most missions at this point seem to all be variations on go here-find things-kill things-move to next area-repeat. While I am still enjoying this at this time, I can see it getting old before I am done with the game. However, there are the Stronghold missions, which are from what I can tell, the Anthem equivalent to Destiny Strike Missions. Just like Strike missions these levels are tougher, feature more steps to complete and finish off with an epic boss battle that really require a full team to take down. They are a blast and I hope there are more of them to come because just like Destiny, the game is at its best in these conditions.

The final thing I want to talk about is the one glaring problem I have come across. A problem that is obnoxious in both its frequency and its impact on that game. That is the load times. They are abysmal and occur far too often and frankly, I feel like in this day and age load times like this really should be a thing of the past. It was so bad I moved the install of the game to an SSD drive but sadly that only provided minor improvement. I can’t say how the load times are on console, but for the PC they need to be fixed ASAP.

I have learned through long hours with both Destiny and The Division that a title like this can’t be fairly judged on initial impressions, so I am reserving my final judgement on the game for further down the track. I am compelled to keep playing because I am enjoying it but at the same time I can see the cracks and can’t help but wonder if those cracks will widen as I get deeper into the game. The good news, from what I can tell, is most of the issues are certainly fixable with a few patches and I get the feeling that there will be at least one patch before the full launch that may address some of the issues I have faced, at least that is what I hope.

So stay tuned as I report in a little down the line for more thoughts on this ambitious title from Bioware and EA.