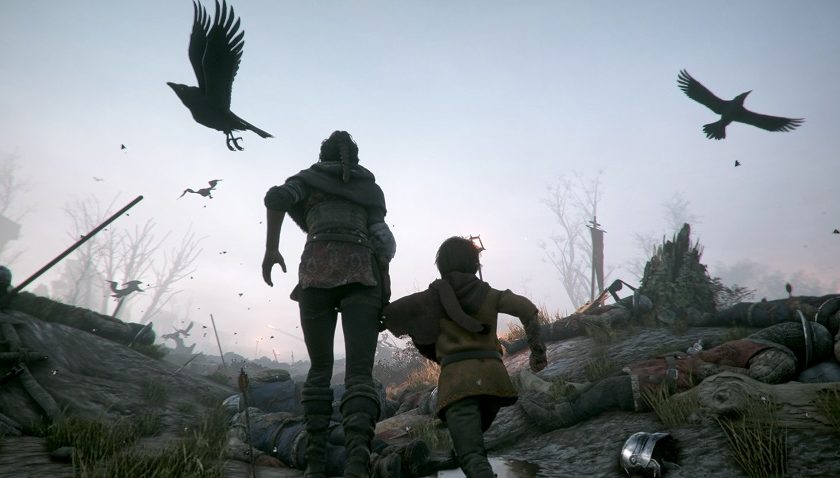 Let’s face it, Rats aren’t exactly the nicest creatures out there. Sure there are some cute pet ones, but in general, they are disgusting, disease infested critters that have decimated the human population more than once throughout human history. That brings me to A Plague Tale: Innocence. Set in the French countryside during the 14th century, A Plague Tale tells a story of mystery, of sibling love, of superstition and of disaster. All that is in the first hour and a half of game time. But most of all A Plague Tale tells a story about rats.

I was very lucky to get my hands on a 3 chapter build of the game a couple of months before its May release and I have to say what I saw impressed me no end. This is a game I was aware of but felt it probably wasn’t for me. To put it simply, I was wrong. From the opening scene, a tutorial set in the woods near a French estate, I took control of Amicia de Rune, daughter of the Count and sister to a sick child, Hugo. Learning the basics of the control scheme was a snap and soon I was diving into the adventure. Early on I took on the role of look after Hugo, guiding him and helping him through the sudden arrival of The Inquisition (nobody expected it), escaping the estate in the process. I can almost hear the groans from here, yes escorting another character is a major part of the game and yes escort quests are the worst. But thankfully the developers have come up with a simple solution to the usual frustrations and that is a hand-holding system. If you are holding Hugo’s hand he follows your every move, if you let go he stays put or follows a specific contextual action, like crawling through a hole to open a door. It makes Hugo feel less like a pain and more like an extension of the main character.

What really strikes me about the game is the mood it sets. During my play time never did I feel comfortable in my environment. There was very little chance to catch my breath. From sneaking through the Inquisition to running from superstitious villagers to avoiding a horde of red-eyed ravenous rats, I was always on the edge of my seat, heart racing with a death grip on my controller. There are elements here from survival horror titles as well as adventure games that excel in setting the mood. My mind was almost immediately making comparisons with Hellblade: Senua’s Sacrifice, in many ways this is a game made in the same mould. There is action, but not enough to call it an action game, there are puzzles but not enough to be a puzzler. The only description that fits is adventure and from what I have seen it is a gripping one at that. The gameplay itself is not groundbreaking, we have seen it all before, but the way the gameplay has been melded with the storytelling and environment is a thing of beauty.

Speaking of story, I am really trying to avoid spoilers here, but let’s just say I was more than a little disappointed when the playthrough ended. So much so I went back through an played it a second time, just to pick up those little story nuggets I may have missed. Both Amicia and Hugo are wonderfully portrayed, Amicia a teenage girl struggling with the responsibility thrust upon her and Hugo a scared yet resilient child who has had his world turned upside down. I was thoroughly invested in their tale and the way things are playing out has me salivating for the full game. For the most part, the game so far has been grounded fairly well in reality, but there is a whisper, just a sniff of the supernatural and I am dying to find out just what the hell is going on.

A Plague Tale: Innocence wasn’t really even on my radar prior to this preview but now I am happy to say that I am going to be grabbing this one day one. There are a few little rough animations, especially with regards to holding hands with Hugo, but there is still two months until the game is released so things like that are to be expected. What I didn’t expect however was to be completely drawn into this world and in such a short time become so invested in the plight of Amicia and her little brother. If the full game can keep this up, this is a title that is going to surprise and delight a lot of people, myself included.

A Plague Tale: Innocence is hitting PC, Xbox One and PS4 on the 16th of May