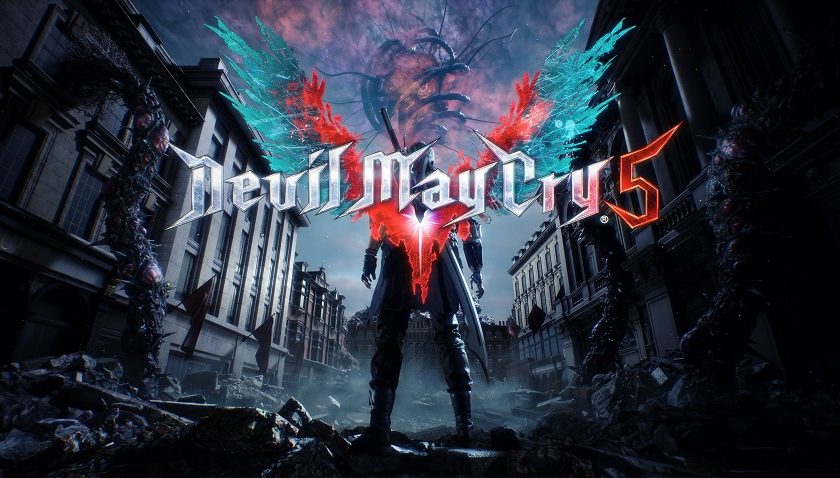 Devil May Cry 5 – A Beautiful Dance of Death

Devil May Cry V is so packed full of style that it could rival a Prince music video at the height of his popularity. Its dynamic and flowing combat coalesces with memorable character design and rich world-building to create a compelling–and, at times, jaw-dropping–3rd person character action game that makes every action set piece feel exciting. Its heavily stylised action feels deep and unique, tying into a rewarding story that will hook new and old players alike.

DMC 5’s campaign follows Dante, Nero and the new character V as they take on the Demon King, Urizen, within the heart of the Qliphoth Tree, a hulking demonic biomass that’s ripped apart the city beneath it, feeding on the blood of any human unfortunate enough to be caught in its wake. Things go poorly, and what follows is a wild ride through the city and back into the heart of the tree to try and find the missing Dante, kill the Demon King and save the world. Avoiding venturing into spoiler territory, it’s a tale full of some mixed character moments and wild twists–some of which feel a tad unearned, particularly to a new DMC player like myself–but nevertheless retains its allure throughout, culminating in some superbly challenging boss battles and rendered action sequences. The biggest disappointment is easily the treatment of the characters Lady and Trish, who feel relegated to eye-candy and sorely miss any of the story weight they may have earned from their roles in the previous games.

You’ll play as all three main characters at different points along the game’s 20 campaign missions, and all three offer vastly different gameplay experiences with distinct combat styles. They each have a basic melee and ranged attack, but that’s about as far as the similarities go. Nero–a gothic Calvin Klein model–has a missing right arm so his melee attacks feel a little laboured, but his Devil Breaker attack can be fast and devastating in equal measure. Contrast this with V, the emo Kylo-Ren, who moves with the aid of a walking cane and can, at times, barely hold himself standing. His frail nature means he relies on demonic familiars to do the attacking for him, only moving in to apply the killing blow when they’ve been sufficiently weakened, changing the focus to maintaining your distance and watching over the battle from afar. Dante’s combat is even more varied, utilising four different stances that offer a mix of attacking and defensive combos, slightly changing up his speed and style. You might think this would all feel too overwhelming, but it ends up feeling more dynamic.

As you take down demons that bubble up from the bloody pools of ooze that form before each battle, you’ll earn red orbs that you can use at the shop. You’ll also earn a style score that tallies up and averages at the end of each mission, giving you bonus orbs. Just stop at a phone and give Nico a call and she, along with her charming southern-US demeanour, will come charging through the streets in her van to your location, allowing you to top up on other coloured orbs that can fill your vitality or various special meters, or stock up on character-based weapons like Nero’s Devil Breaker, a detachable mechanical weapon to replace his missing right arm. Mostly you’ll spend your orbs on new abilities for each character, which unlocks new combo attacks for each weapon and other perks, like a faster running speed or a useful double jump.

The depth of the combo system can seem like a lot to take in; once you feel like you’ve got the hang of one set of moves you’re given a whole new move set to remember. But Capcom has thought of this, offering an auto-assist system that effectively reduces the combat to single buttons, letting you launch into incredible looking combos with very little effort, but at the cost of a reduced style score at the end of the mission. While advanced players will feel at home with the complex nature of combo system, newer players who struggle to get a grasp on the controls won’t miss out on any of those sweet looking moves.

It doesn’t disappoint in the looks department, either. Animations are smooth and blend together almost effortlessly, making the combat as visually rewarding to watch as it is to play. While some of the platforming can feel a little clunky thanks to an awkward feeling jump, it’s sparse enough that it’s not really an issue. The overall environments are a tad uninteresting tonally, with muted blacks and vibrant red tones featuring heavily throughout most of the world, it’s not without the sort of gothic/horror charm you’d want from a game about slaying demons. The Qliphoth Tree is grotesque, full of the husky remains of the humans who were caught by its parasitic tentacles, and bloody mounds that feed the large vines that have torn the city around its roots asunder.

The devotion to style here is very strong. From the characters themselves, their mannerisms and wild outfits, all the way through to the excellent bespoke menu sequences at the top of each mission, there’s a real sense of attention to detail here that’s super impressive. Action sequences feel lovingly crafted and choreographed, and the game’s thumping soundtrack provides a stellar backdrop to when the action kicks in before dynamically ending after landing the final killing blow. And all of this style just adds up to equal pure enjoyment.

If playing when connected to the internet sometimes you’ll come across the ghost of their playthrough of that mission playing out before your very eyes before you’re asked to give them a thumbs up or down for their skills at missions end. Though more often than not the other characters are somewhere else on the map completely, rarely ever getting close enough for you to check out what they can do, which is a little disappointing given how great the combat is to just sit and watch.

Devil May Cry 5 is a strong game no matter which way you look at it. From its superbly detailed and interesting characters to its incredibly deep combat system that’s just as accessible as it is complex, Capcom has produced an absolutely stellar looking and playing action game that will have people talking for months.