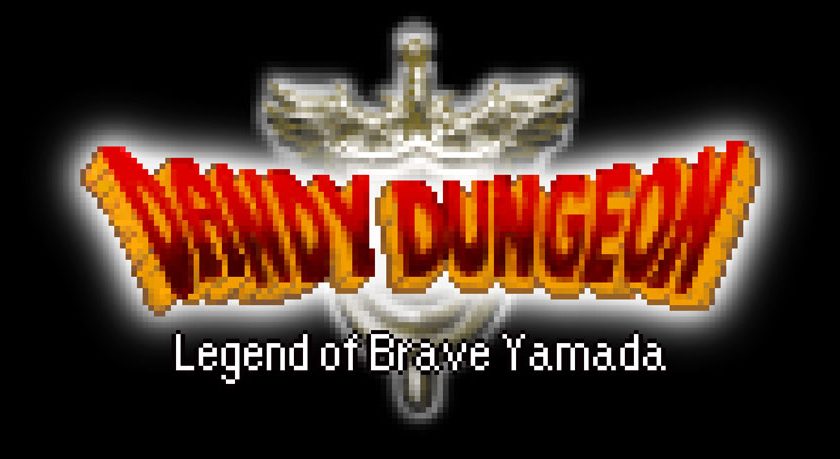 Dandy Dungeon – Legend of the Brave Yamada is a Switch port of Onion Games’ utterly charming F2P Rogue-lite RPG which first released on Android and iOS in early 2017. While the mobile versions ceased updating late last year, the microtransaction-less Switch version provides a perfect opportunity for players to immerse themselves in the wacky world of Yamada-Kun and his dungeon delving adventures.

Created by Japanese developer Kimura Yoshiro (Little King’s Story, Million Onion Hotel, Black Bird), Dandy Dungeon follows Yamada, a game developer in his late 30’s who loses his job at a large game company. Around the same time, he falls madly in love with his new neighbour, Maria. Yamada channels his subsequent frustration and passion into an RPG pet project which the player is ostensibly testing for him. As the story unfolds, the lines between reality and Yamada’s game begin to blur resulting in a wonderfully surrealistic experience that has some biting social commentary hidden underneath.

Having put many hours into the iOS release of Dandy Dungeon, I was keen to see how well it translated to the Switch platform after losing its microtransactions and social media tie-ins in the process. Fortunately, despite shedding some features Dandy Dungeon lost none of its charm in the transition and the rewarding gameplay loops kept me engaged once more. Using the controller or touch screen, players guide Yamada through dungeon floors by plotting a path for him to follow. On the way to the exit, enemies will try to hinder his progress and can be defeated through simple auto-combat with the occasional use of spells and items as dictated by the player. The quick pace of play alongside an array of weapon and armour items and upgrades means that each dungeon provides incremental improvements for the player and pushes the sort of ‘one more go’ mentality that the best (or in some cases, most exploitative) mobile games are famous for that resulting in very lengthy play sessions as opposed to a quick burst in between other activities. Furthermore, rather than simply strip out the microtransaction elements, Onion Games refined them to instead utilize in-game currency at a rate which encourages players to use them sparingly, which feels in keeping with the spirit of the iOS implementation.

Dandy Dungeon wears it’s love for classic Dragon Quest on its sleeve primarily through the pixel art design of characters, enemies and environments, many of which pay homage to the style of famed artist Toriyama Akira . While early tile sets can become repetitive, more diverse arrays of environments unlock through further play and the entire affair is enriched by the charming soundtrack courtesy of Sugiyama Keiichi who blends chiptune melodies with single words or short phrases, generally to comedic effect in a manner reminiscent of Terry Scott Taylor’s work on The Neverhood.

After playing plenty of Dandy Dungeon on iOS and being saddened by its shuttering on that platform, it’s great to see it given a new lease on life and a chance for a fresh audience on the Switch. While it may seem a touch simple at first glance, it’s a fairly deep and rewarding experience that is more than the sum of its parts thanks to the humour and passion it exudes throughout. I know I’ll be spending many more hours delving through dungeons with Yamada-kun.

Dandy Dungeon is available digitally through the Australian eShop..