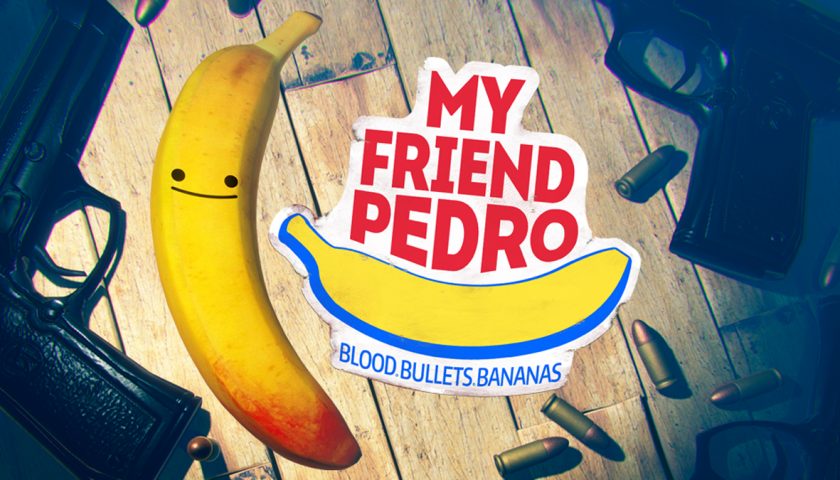 My Friend Pedro – A Ballet of Bullets and Bananas

Playing My Friend Pedro is like discovering a new favourite song; you’ll quickly be drawn in by its cracking tune, but even the catchiest hooks grow wearisome when played ad nauseam. Much like the potassium-packed fruit featured in-game, Pedro is best consumed in moderation as part of a healthy gaming diet.

Billed as a “violent ballet”, My Friend Pedro delivers on its bold and braggadocio promise of sensational 2D action sequences. Very early on, you’re given the means to shoot through swathes of goons, including the Max Payne-esque ability to slow down time in bursts while dual-wielding uzis aiming in opposite directions. The first time diving through a window, guns blazing while time inches slowly forward – my word – it conjures a sense of aesthetical and mechanical zen matched by few other games. The fiftieth time? Not so much.

My Friend Pedro feels fantastic to play – for the most part. One of the first things you notice in the game’s opening moments is that your mysterious protagonist feels deliberately heavy to control. Not quite Arthur Morgan of Red Dead Redemption 2 heavy, but heavy nonetheless. While this is absolutely not a criticism, this weight leads to an adjustment period where you enact a trial-and-error approach to figure out what jumps and manoeuvres are possible.

Even during the late-game stages, I misjudged jumps and fell into death-inducing chasms because jumping in slow-mo didn’t cover as much territory as expected. However, I did eventually figure out that much of this frustration can be mitigated by jumping, and then triggering focus once your trajectory is already established.

Beyond this, stringing together a combo of wall jumps, kicking a dead goon’s viscera at another to-be victim, while ricocheting bullets off a frypan into several other baddies feels incredible. While dual-wielding weapons, shooting in opposite directions is as simple as aiming at one target, holding down ZL and then aiming at another target. Alternatively, when the bullets are flying freely in your direction, holding down L gracefully pirouettes out of harm’s way, gliding across the ground or through the air, briefly impervious to damage. There’s a certain elegance – beauty, even – to running through a corridor, arms outstretched in two directions, delivering hot lead to My Friend Pedro’s hapless foes, interspersed with an effortless gravity-defying spin reminiscent of a John Woo film. Accompanied by a pumping gritty electro soundtrack, My Friend Pedro doesn’t just ooze cool – it brutally pistol whips you across the face with it.

On the other hand, comprised of various similarly-themed sections of levels – plus a handful of brief ventures into the surreal – My Friend Pedro wrestles mightily between spectacular monotony and moments of inspired spectacle. While there are iterative gameplay additions introduced throughout its five-hour duration, such as a thrilling motorcycle chase used in one section but never revisited, much of what you do revolves around the same cycle of jumping, diving and slow-motion shooting in slightly different ways. Annoyingly, not all of the wrinkles added to the gameplay formula are made equal. For example, there are some clever implementations of ricocheting bullets off of specific surfaces, but a mid-game boss centred around the concept falls completely flat in its lack of innovation. That’s not to dismiss the satisfyingly different weapons on offer or some of the clever wall-jumping platform sections, but My Friend Pedro could have been even better with more considered use of its different parts.

Unfortunately, the utterly bizarre premise of being guided through a violent world by a sentient banana named Pedro is a disappointment. Similar to the fellow Devolver-published Hotline Miami, My Friend Pedro establishes a surreal story that leaves the protagonist, and you by extension, in the dark as to what’s going on. Frustratingly, My Friend Pedro’s attempt at narrative comprises of overly vague breadcrumbs delivered through dialogue boxes. In fact, the late-game moment of truth is revealed via a chunk of exposition. Combined with an inadequate setup, it’s a real bruised, mushy banana of a moment – a shame, considering how intriguing the surreal premise was.

My Friend Pedro’s slow-mo stylings create for some brilliantly GIF-able moments, but it’s a game so fixated on the highlights that it neglects the troughs in between. Due to such a high volume of what would be considered highlights in other games, they are diluted to the point of blending into one big blur here. I’m normally not in the business of recommending how you play a game, but My Friend Pedro is best enjoyed in short bursts of play, which helps to keep the action fresh, lest the repetition soon becomes apparent. The tepid delivery of an otherwise quirky story premise doesn’t help, but the main gameplay hook is top-class, despite it wearing thin by the closing credits.