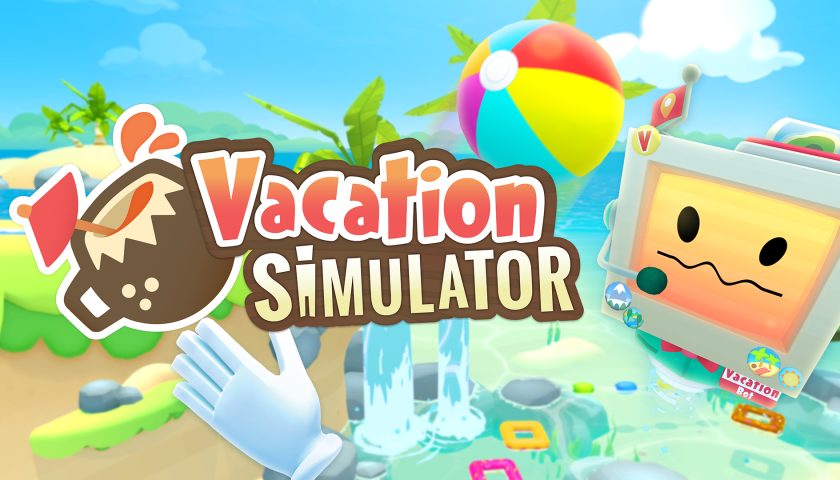 Vacation Simulator Review – Bigger, But Without the Feeling

When Virtual Reality platforms began to release several years ago, many had expected groundbreaking ideas to wash across the market and win the hearts and minds of prospective players. Whilst those hearts and minds were comprehensively won over, it wasn’t a technical revolution that was responsible, in fact, it was a pretty basic, satirical take on the most pedestrian aspect of human existence, that stole the show. Owlchemy Labs’ Job Simulator harnessed the power and potential of VR in the simplest of ways, by placing us in the “shoes” of bots in a post-human world who wish to learn about our ways, and now those same crazy bots are back at it again as they attempt to learn about how we relax in Vacation Simulator. The question is, can lightning strike twice?

One of the great strengths of Job Simulator, when it launched back in 2016, was its simplicity, and that simplicity made it accessible, for people new to VR, and even for those unfamiliar with traditional gaming conventions. You could find yourself working as a cashier at a convenience store, “attempting” to prepare meals in a kitchen or even working an office job, and as the cliched, stereotypical events began to take place within each setting, enough tools were given to you to completely belittle the entire experience – that extracted immense laughter from all involved. Before, experimentation, wackiness, and creativity from the player perfectly complemented the weird and wonderful scenarios you found yourself in. This would often result in the deepest of belly laughs, but by venturing on holiday, the scenarios themselves are already more relaxed, making the wild and weird actions that you got up to before, suddenly fail to feel as wild or weird.

After a quick calibration and brief pep talk from your leaders, Vacation Bot and Efficiency Bot you’ll be out and about experiencing all that three locations, Forest, Beach and Mountain Vacation, have in store. Each level has its own unique mission types, but also a few common ones, most of which involve some form of cooking, or use of a camera, others though will see you going on hikes, duking it out in snow-ball fights and getting in on some beach sports. As the game progresses a number of these missions will begin to stretch across multiple locations; the cooking based activities are one such example of this, where a bot, whom you’ve been tasked to feed, wants a particular type of meal, a meal that has some of its ingredients stuck at a different holiday location. As such, you’ll need to take what you need in your backpack and cart items to and fro to get the job done, it can get a bit tedious, but it does facilitate a heightened level of interaction with the world of Vacation Simulator.

The bots themselves are of course still really well written and acted, making the scenarios shine, with very few missions ever feeling like a grind in any way. Each location, save for the Forest’s hiking track, has been designed to ensure that no two spots look or feel the same, and as such giving each playspace its own feel. With each successfully completed task, you’ll be rewarded with Memory Credits, these credits can then unlock additional features as well as one final location to play in after you’ve accumulated a minimum total of 30 Memories.

In their attempt to expand the world so drastically, it would’ve been easy for players to find themselves meandering along aimlessly before ultimately throwing in the towel. Thankfully, both Vacation and Efficiency Bots appear on the scene semi-frequently to provide you with enough guidance to remain on the right track, no matter the location you’re in. There are also enough different, and challenging activities to complete to ensure that you’re immersed in the game for far longer than its predecessor.

In attempting to create an interconnected world, Owlchemy Labs have made Vacation Simulator a bit messier than it needed to be, the various activities are as entertaining as ever, and the cast of bots as amusing as before, but the final product does test your patience more than the entry that came before it. Overall, Vacation Simulator is a bigger, better experience than its predecessor but at the same time by sending you out on multiple level spanning chores results in the fourth wall being broken far less frequently than before.