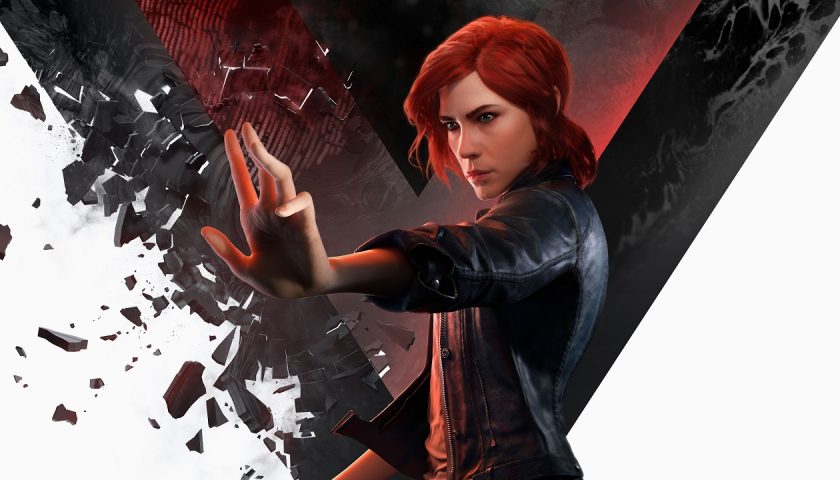 Control – Bend Your Mind and Your Controller

You enter a strange building, one you swear you have never seen before even though you have visited this part of New York on many occasions. The building looks much like any other office block at first glance, desks, meeting rooms, offices for management, but upon closer examination, things are clearly not quite right. There are no modern conveniences or technology to be seen. No mobile phones, no flat screens and no fancy computers. Typewriters, reel to reel recording devices and UHF radios are in abundance. It is like you have wandered into the set from Mad Men. A calm guiding voice in your head suggests you head up to the director’s office and ignore the oddities. This voice has been a calming influence your whole life and it has never lead you astray so you follow its instructions. More strange things become apparent on your way, but you steadfastly follow the guiding light in your head. Upon arrival in the director’s office, you notice a man, dead on the ground, an apparent suicide. The smoking gun is laying next to the body. It is then your inner voice gives you one more command. Pick up the gun.

That is where Control kicks things off and that is where I am going to leave my explanation of the story. Going into Control with as little knowledge of the story as possible is key to getting the most out of the game. Remedy, creators of Max Payne, Alan Wake and Quantum Break are known far and wide for their ability to spin a strange and wonderful tale but know this, Control is the strangest one yet. But despite its inherent weirdness, I found it an absolutely fascinating sci/fi tale that has roots in ancient myth and legend. The world-building that Remedy has put together here is second-to-none and I feel the best thing I can say about it is that even someone who notoriously couldn’t be bothered reading collectable notes or listening to audio logs in games such as myself had to find and read every single one I could get my hands on. This is a fascinating world that begs to be explored, examined and endured. From fascinating tidbits about the Bureau of Control to scientific explanations of past odd events to some wonderful easter eggs (including an incident report about a certain Author and events in a town called Bright Falls), every piece of info is crafted in such a way that I found it impossible to resist.

Jesse Faden, the character who I took control of, is a wonderfully complex character to examine as well and the game does a wonderful job of doling out information about her background at the perfect pace. Just when I thought I knew everything there was to know about Jesse, another reveal would trickle out, causing me to readjust my feelings once again. Thankfully, one thing that wasn’t in question was her ability to handle a tough situation. From the earliest moments, with only a gun at her disposal, to the end of the game where the paranormal and physical clash, Jesse was a character I could believe in, someone who took it in her stride and faced the seemingly insurmountable challenges head-on.

Thankfully I can report that the gameplay matches the setup. Combat is handled a little differently to most 3rd person action games in that finding cover is not really what it is all about. This is a game about movement and staying on the go. Your weapon has unlimited ammo but takes a little while to recharge so the key to combat is mixing shooting with a range of powers that you can unlock by discovering a variety of supernatural objects stored in the Bureau.  The powers include things like telekinesis, creating a shield out of debris, the ability to float and a quick dash. It is essential to mix things up in combat and staying still is a surefire way of finding a quick death. Dashing through a level, lashing things with flying rocks while you take down other enemies with one of your gun’s five unlockable modes is an exhilarating thrill, that is satisfying in a way that few games are. This isn’t an easy game but it is certainly doable as long as you keep your head on a swivel and use everything in your arsenal.

The difficulty leads me to Control’s biggest flaw and that is its checkpoint system. When you die you are returned to the last checkpoint you visited, which quite often is some distance from where you died. This becomes horrifically apparent with some of the game’s more challenging boss fights as dying can return you some distance from the battle, forcing you to fight your way back to the boss only to die again. The fact these checkpoints aren’t closer is a real bummer especially when you consider on more than one occasion the only thing between me and the boss was a whole lot of running, so all it did was add extra, frustrating time to my playthrough.

I also noticed a few framerate issues in the game, especially after pausing it, but Remedy has promised that the Day one patch will fix this so hopefully by the time you get hold of it, the stutters should be a thing of the past. The rest of the game looks pretty darn cool, with Remedy creating a captivating playground to tell its story. For the most part, the enemies and NPCs look great as well, with only the occasional jarring facial animation letting the side down. Sound design is also fantastic. The moody murmuring of the game’s enemies adds a creepy tension to proceedings and the soundtrack is full of memorable tunes, including some cracking rock songs made specifically for the game. The voice work also needs a special mention. Every single character is wonderfully acted out, Remedy clearly found the right people for this job with every single voice giving a perfect performance. It was also wonderful to hear the voice of a familiar alcoholic detective again, even if it was in a different role. The audiovisual teams at Remedy really have done a smashing job at creating a wonderful world for this captivatingly crazy story to play out.

With Control, Remedy has managed to make their most complete game yet. Combining the best bits from their past titles along with a story that absolutely has to be experienced in all its mental glory means that Control is one of the true standout titles of the year. Sure the checkpointing can be frustrating and there are a few little hiccups here and there but the sheer fearlessness shown by Remedy with this title needs to be applauded and engaged with. If you don’t like the way Remedy goes about their craft, this isn’t the game to convert you, but for everyone else, know that this is a title that will engage with you like no other game this year has. It is complex, challenging and more than a little crazy and I can’t get enough.