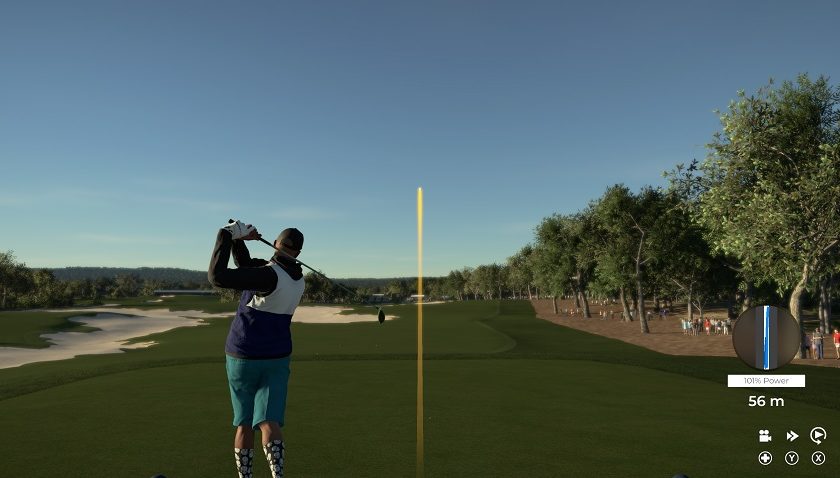 PGA 2K21 – A Solid Drive Down the Fairway

The Golf Club has evolved. Gone are its humble beginnings as a kickstarted golf franchise and in its place is PGA 2K21, a massive endeavour brought to you by one of the biggest names in sports video games. With that change expectations rise and more is needed to impress. A plucky little upstart can get away with things a giant of the industry can’t. So how does PGA 2K21 handle those expectations? Is the big stage too much or does it rise to the occasion? I am pleased to report that, for the most part, it is the later.

For those that missed my recent preview, (which, through the magic of the internet you can read here:) controls are about what you would expect from a modern golf game. Draw the thumbstick back and push forward in a straight and smooth motion and you will crush the ball down the centre of the fairway, deviate and the ball will end up in all sorts of devilish situations of the man-made or natural kind. Playing this game at professional difficulty is much like the real sport, any mistake is punished heavily. But thankfully there is a range of options to tweak the experience to your skill level, meaning that all virtual golfers can have a good time, not just the ones with abnormally precise fine motor skills in their thumbs.

Looks-wise, it is a nice day on the course, but not a stunning one. PGA 2K21 is perfectly fine in the graphics department, with courses looking great and real-life pros fairly close to the mark, but it must be said there is room for improvement. This isn’t in the same league as NBA2K or FIFA but then again I am sure it received a third of the budget that those games did so there isn’t too much to complain about. If nothing else the only really distracting part when it comes to looks is some of the crowds, which look worse than those Skype video boards the NBA is using at the moment instead of real people in the stands.

What HB Studios have done really well is replicate the PGA tour and show it off in a manner that is akin to watching it on TV. The commentary is pretty good, with plenty of lines of dialogue so repetition isn’t a problem and for the most part, they are accurately describing the action as it happens. There were occasions when the commentators would lambast me for a terrible putt when I only missed a 15m putt by cms and they only speak in imperial terms, so even if you have measurements set to the metric system they talk in feet and inches, but overall they bring a nice bit of flavour to the proceedings. I also liked the cutaways to other golfers during play, showing off highlight shots and close misses. It is a nice little bit of immersion and didn’t wear out its welcome (though I could turn it off if it did.)

One of the real highlights of all the HB studios golf titles is the course creator and PGA 2K21 is no exception. Fiddle with some sliders, adust some dials and within minutes the Player 2 Country Club was born. Of course, the difference between a cracking round and endless tedium is in the detail. Thankfully everything in the editor was super easy to use, even with a controller. Adding trees, water or sandtraps is a breeze and the wide range of landscaping tools mean that you are pretty free to shape the course how you please. When it is all done you can publish your course to the world and let people from all around the globe take on your creation. Sadly I didn’t quite get time to get the Player 2 Country Club to where I want it before this review was due, but you can look for it soon, I promise it will be online eventually. What this creator does mean though is that you will always have hundreds of new courses to conquer, ensuring the game will say fresh for a long time to come.

My Player mode is a nicely fleshed out create-a-character mode that allowed me to get pretty close to a much slimmer doppelganger for my PGA tour duties. People who love recreating themselves or getting creative with looks will find a lot to love here. My Player is also where you spend sponsorship money to buy new clubs and outfits. It should be noted that you can use real-world money to buy in-game currency, but as the outfits are all cosmetic only and no set of clubs is better than another (they just have different strengths and weaknesses) doing so is a bit pointless. You aren’t missing out by earning them in-game through sponsorship challenges, rivalry goals and event winnings. This isn’t like NBA 2K so there is no need to get your credit card out at all.

There are a couple of issues that I can’t ignore with PGA 2K21. The first is the lack of a Ladies division. Women’s golf is enormous and in this day and age, to not include it seems shortsighted and a little behind the times. The fact that I can play against 12 male pros and 0 female pros needs to be fixed before the next release, there is no excuse for that omission (you can create women in the My Player mode though). The other issue I have is the game is very American focused. I get that the PGA tour is the big draw here, but I would like to see some famous courses from around the world get featured too. Any golf game that is missing St Andrews is going to feel incomplete to real-world golfers when they pick up the controller.

Despite these issues, there is no doubt that PGA 2K21 is a great addition to the virtual golf genre. Sure we have been starved for choice, but that doesn’t lessen the enjoyment PGA 2K21 offers. An exciting career mode, engaging mechanics and a wonderful course creator will ensure I am playing PGA 2K21 until the next version is released, which is all anyone can ask for from a video game sports title. Grab the clubs, put on a hat and join me in ruining a good walk, PGA 2K21 is great fun for all.

PGA 2K21 was reviewed on PC with code kindly supplied by 2K Australia.