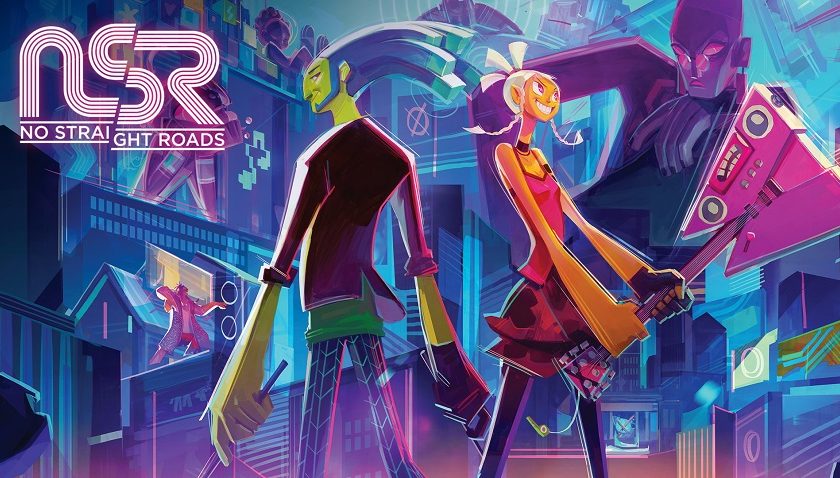 No Straight Roads is one heck of an audiovisual trip, intertwining many musical genres throughout its punk rock adventure, but loose gameplay elements suggest it needed some last-minute rehearsals before hitting the main stage.

In recent years, we’ve been blessed with some brilliant games that fuse traditional game genres with musical and rhythm-based components. Immediately springing to mind is Crypt of the Necrodancer and its Zelda follow-up Cadence of Hyrule, a series where dungeon-crawling to the beat is cleverly integral to the experience. Additionally, recent rock opera BPM: Bullets Per Minute employs a similar approach, rewarding you with combos and power chords for successfully shooting enemies to the rhythm in a first-person setting. I could wax lyrical about more examples such as Thumper, Beat Saber, and Just Shapes & Beats, but this would then become a very long review without addressing the actual game in question. The point is, No Straight Roads doesn’t quite meet the lofty standards set by its musical colleagues.

No Straight Roads, a 3D action platformer, sees you play between Mayday and Zuke, a vibrant duo known by their band name of Bunk Bed Junction, hellbent on restoring rock to its former glory in Vinyl City. This city, under the dictator-like leadership NSR, discarded rock in favour of EDM, believing it to be better at producing power for its districts. However, Mayday and Zuke are furious when they learn this isn’t true following a blackout reveals only high society is covered by backup generators. Cue a spirited journey to take down the oppressive regime through the power of rock.

To do this, you’re tasked with beating NSR’s artists in battle, along with some platforming to surpass their security along the way. Fighting feels like a light hack-and-slash game, where Mayday and Zuke rack up combos and use different combat abilities to overpower foes. The fiery lead guitarist Mayday favours a slower, heavier combat style, while the cool drummer Zuke is quicker but less powerful with his strikes. Every enemy attacks based on the music, with every beat acting as a tell for when to dodge and attack. Where No Straight Roads disappoints most is in its floaty movement and combat. While not entirely imprecise, controlling the rock duo doesn’t feel anywhere near as satisfying or responsive as other games in the genre — rhythm, action or otherwise. Additionally, enemy variety is lacking, merely acting as slight obstacles en route to the significantly more interesting boss battles.

Reaching the end of each level is where the real fun begins. No Straight Roads‘ boss battles are multi-stage epics against an eclectic cast of adversaries wielding a different style of EDM. Successfully seeing off these baddies requires observing how the music telegraphs their attacks, in addition to identifying their weaknesses. Although combat is slightly loose, it’s easy to forgive due to the boss encounters’ strong design from a visual, musical and gameplay perspective collectively.

No Straight Roads is at its pulsating best during these encounters largely thanks to a dynamic soundtrack that responds to your performance. Alongside the bosses’ health is a meter displaying whether EDM or rock has the advantage, changing the fight’s music accordingly. When beginning a fight against one of NSR’s artists, their signature sound will dominate, but as you land successive hits and deal damage, pounding drums and wailing guitars seamlessly break through the noise. It’s fantastic to hear your battle efforts tangibly reinforced with rock sounds piercing the electronica to signal your ascendancy. Combined with No Straight Road’s vibrant art direction, this soundtrack absolutely rules in creating an appealing setting. However, the rap battle sections are comparatively weak, both sonically and lyrically — fortunately, these only form a minor component of No Straight Roads‘ music.

Surprisingly, after No Straight Roads‘ starts with some cheesy, ham-fisted cutscenes, its writing improves to convey deep motivations behind why people create art. Initially, Mayday and Zuke get caught up in repeating their take on the not-unwelcome ‘for the many, not the few’ message ad nauseam, deeper conflicts become apparent. For example, one story arc involving a young prodigious pianist and her overbearing mother brought a refreshing layer of authenticity to an otherwise hyper-real game.

On a superficial level, it would be easy to dismiss No Straight Roads‘ story as another weary debate of rock vs EDM over which genre reigns supreme. However, this conflict merely set dresses the true message about classism and structural inequalities. No Straight Roads is a celebration of many music genres, showing what is possible by mixing them together to create great things. In fact, its soundtrack performs much of the heavy lifting when some of the gameplay elements falter.

While No Straight Roads‘ floaty combat occasionally frustrates, its strong sense of self is commendable. Terrific art direction and musical composition add flourish to a game that otherwise may have been too easy to miss out on.