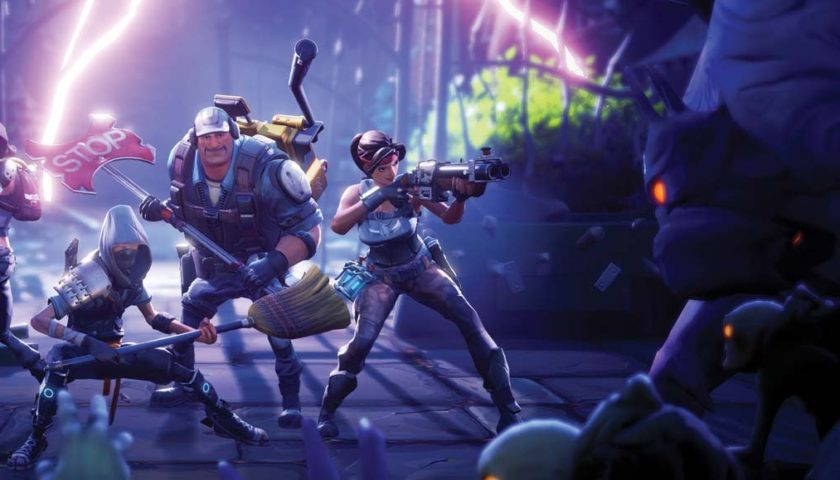 Fortnite has been a long gestating game coming at Epic Game, it was first announced in 2011, only three weeks after the studio had devised the initial concept, and well before formal development on the game had truly begun. Fortnite was promised to be equal parts tower defence, wave based survival, and co-op shooter that sees players build by day and fight for survival by night. I’ve now spent many hours fumbling around with a Fortnite that’s currently in early access, and while I see many promising nuggets here, there are still several other aspects of the Fortnite experience that do their best to hold you back as you look to race further ahead.

A very slow tutorial is excessively thorough as it explains many of the game’s multitude of components; fort building, resource collection, crafting and many more. I quickly grew tired of some lengthy explanations of features that should only take a few moments to comprehend, while there were several other aspects that I feel were too skimmed over all too briskly, with a search through some overly convoluted menus being required to learn how to switch heroes for example. Despite the moment to moment action being quite fun, many of the features that underpin this enjoyment stifle any momentum that you were building. Between dolling out XP to heroes, supports, weapons and then smashing up Llama Piñatas for loot, the between match phase is so long process that you’d want to hope that you have a very patient group of friends playing with you between games so that you can make good on your new resources.

The core hook of Fortnite is shaping up quite well however; by day the fort slowly comes together with some excellent tools that allow the most creative constructors to develop structures that all incredibly detailed but also are unbelievably hard to penetrate. Creative players are already forcing the waves of undead in the form of Husks, Mimics, Flingers and more through bottlenecks so that they cross some of your most potent traps and are easy ranged targets, while building their fort high and weaving it around other large objects to provide excellent vantage points. Movement and shooting are quite sharp allowing for some pin-point precision and some epic plays.

When night arrives, and the storms with it, the Husks begin to march and the fight for survival begins. In a party of up to four players who can take on any of the four available classes (constructor, soldier, ninja and outlander), you’ll look to hold off constantly more powerful waves of zombies. As for those classes, they’re largely self explanatory, however the Solider is your heavy damage dealing class, the Constructor has perks that speed up and enhance the construction/upgrading/repair of your fort, the Ninja is a fleet footed attacker while the Outlander is an excellent scavenger.

Success in these missions can look different from player to player. For entry level players you’ll be satisfied with the completion of the core objective while more advanced players will be striving to reach bronze, silver and gold tier rewards that grant extra perks upon completion of the mission. The learning curve is steep however so if you’re looking to make the jump into Fortnite then brace yourself for several hours of confusion and an absence of clarity before the pieces begin to fit together. As you spend more time with the game, the  character development, the menus and more become easier to navigate, so consequently you’ll be spending more time enjoying the core element of the gameplay experience – the missions.

The servers, outside of some very rare hitches have held up quite well, and forming a party, without or without having other friends playing has been fairly easy. Communication between team members has been a point of frustration to this point with few utilizing chat functionality let-alone their microphones. For a successful result, you’ll want all players communicating between one another but with a single chink in the chain things begin to crumble – I personally found myself to be a victim of this on several occasions.

For as high as some of the Fortnite highs get, there are some lows that serve as a kick in the teeth of those wanting to immerse themselves in the experience. The combat and movement is sensational, the classes are diverse and balanced, and the construction aspect is incredibly deep; the menus however are clunky and tricky to navigate, interaction between match-made players is lacking and the micro-transactions are a little invasive. Overall however, there’s promise here, and with the final, full release planned for Early 2018, if Epic can tighten up a few of the loose threads then Fortnite has a chance to capture an audience and hold them for a long, long time.