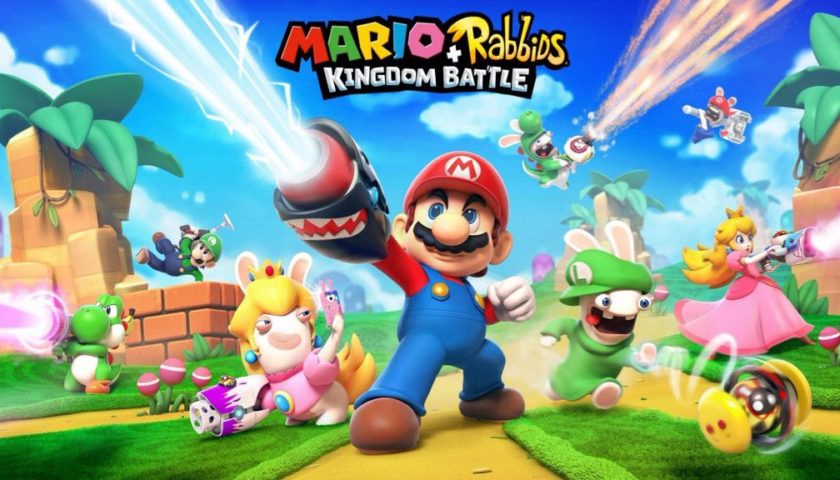 Love them or loathe them, the Rabbids tap into the same lovable archetype as Despicable Me’s Minions. Both are mischievous, child-like creatures that are entirely autonomic in nature and who react to stimuli with predictably chaotic results. At first, the pairing of Rabbids with the Mario universe might not seem obvious, but Mario & Rabbids makes it work, though not before a rocky opening cinematic that tries to explain the merging of the two worlds. To be honest, we would have been fine just diving in sans story.

The result of all this is the somewhat funny creation of Rabbid versions of Peach, Mario and Luigi, as well as various mergings between Mario-world objects (flower power, snapping plants, ghosts and so on) to create the various Rabbid enemies who do their best to stymie your path through turn-based strategic battles. Of these, Rabbid Peach is quite a funny character. She brings a sense of irreverence to everything she does, taking selfies during boss battles and leaning casually against cover as though the whole thing is just a stroll through the park.

If the battles were the whole game, you’d only have a fair-to-good strategy title, but Mario & Rabbids manages to elevate itself above its component parts to become something that’s just short of excellent. The overworld is designed as a series of corridors and open spaces, through which you guide your team of three, sometimes with extra followers (because Toad keeps getting lost and needs an escort). Battles take place as soon as you pass through a set of dark flags. After these, you can walk through the battlegrounds you’ve completed as you search for secrets and unlocks in each open-ish world. This usually amounts to pushing blocks around or pressing colour-coded switches, as well as utilising specific skills that you only gain after completing the four main bosses. There’s also some canon-firing shenanigans and the familiar red coins pop up from time to time to unlock new weapons.

The strategy gameplay soon ramps up in difficulty and it’s not long before you’re juggling the unique skills of your team against some rather overwhelming odds. Ubisoft must have sensed this because soon in your adventure you’re given the option to enact “easy mode” which heals your team mid-chapter and gives out double HP. Honestly, I found myself accepting this option almost automatically for the last two regions, simply because the only alternative – gaining enough coins to buy increasingly expensive weapons in order to be on an even level with your enemies – is to replay earlier chapters and challenges for fairly meagre payouts. The way coins are doled out, you never feel quite powerful enough to kick arse, and the excitement of buying Mario a new, more powerful gun is soon dampened by battles that pit you against harder, more aggressive opponents.

My main thought while playing Mario & Rabbids was that the inevitable sequel will be *something*. This first attempt gets most things right, though, and it certainly looks the part. The world is gorgeously designed and it really does look like a Mario title. Apart from the difficulty in the second half of the game, most battles are usually survivable, with more effort needed for each chapter’s challenges, some of which require you to come back when you’re far better equipped. I often looked at the requirements, such as “kill all enemies in one turn” and laughed at how underpowered I was for the task.

The game modes started to get a bit old by the time the fourth area was unlocked, and I came to dread the inevitable “get to area” and escort missions, as they featured endlessly spawning enemies. The specialisation of each party character was a bit hit-and-miss, too. I found Luigi a bit useless as a sniper because his low health level meant that I was constantly moving him away from enemies and then finding that he couldn’t even reach them, despite the fairly small map sizes. He was always the first to fall during difficult fights, which became frustrating. By the end, I stuck with Princess Peach (the real one) because of her healing jump, and Rabbid Yoshi for his ability to sweep kick three enemies in one turn. However, the fact that you earn skill tree points for all your characters is handy for keeping everyone levelled and ready to tag in. You can also reset the skill tree and play around so you can approach certain challenges from a different angle (but I could never be bothered with this).

I was quite impressed with the amount of moves available in a single turn, especially compared to something like X-Com 2, where every step is of monumental importance. Mario & Rabbids is much looser, allowing you to enter pipes, jump off teammates’ heads (to gain high ground or cross gaps) and then also kick or jump on enemies, all within the same move phase. You then get an attack option, followed by a special ability per character. Given this leeway, there’s often little chance of painting yourself into an entirely dire corner. Things get difficult, certainly, but not as structurally complex as other games in the genre, which isn’t a bad thing. The cute graphics and Mario theme means that a certain kid-friendliness had to be maintained. However, there’s still enough strategy meat for genre enthusiasts to get stuck into, especially if you choose not to employ Easy Mode.