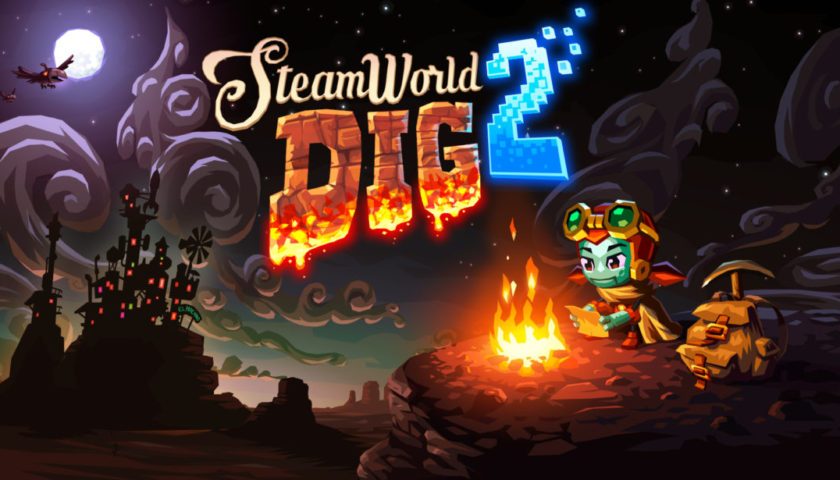 Whilst not the first game in the franchise, SteamWorld Dig was the game that raised the franchise into the spotlight. A revelation in a time where downloadable, independently developed games were still just beginning to dig out a niche, SteamWorld Dig was highly praised for its addictive gameplay loop, and simple yet effective mechanics. After taking a diversion into space and turn-based strategy in the form of SteamWorld Heist, Image & Form have returned to the popular excavation game having recently released SteamWorld Dig 2. Player2’s own Matt Hewson and Paul James have come together to present you this review of it.

Paul James: So it’s fairly well known that I’m a big fan of the SteamWorld games, Dig was my introduction, I took the time to go back and get to know the DS entry (SteamWorld Tower Defence) and of course I both reviewed (and loved) SteamWorld Heist. When it was revealed during a Nintendo Direct that SteamWorld Dig was to be getting a sequel, well it was fair to say that I was invested immediately. Upon finally getting to play the game, I must say, it’s exceeded my expectations. Where the original game loosely embraced a number of MetroidVania elements, the sequel has fully embraced them. What did you think of how heavily SWD2 leaned into those MetroidVania aspects Matt?

Matt Hewson: Personally I loved how well it incorporated that Metroid feel into the game. From the ability based progression to the wonderful way the game guides you in the right direction without ever feeling like it is holding your hand. Dig 2 has polished that formula until it shines. What really stood out for me though is the oodles of charm the game displayed. I mean Dig and Heist were both charming experiences but this one takes it to a whole new level. Dorothy is a wonderful character, with a determined and loyal personality that really shines through and her sidekick, Fen is a ball of slightly sadistic fun that brings some light humour to proceedings. It feels almost like a Pixar movie in the personality types on display and in the way those archetypes interact. If you are going to create a story such as this you may as well copy the best right?

Paul: A good game, film, TV series or other piece of art, draws on the best aspects of those around it and adds its own unique charm to make itself stand out. As you’ve referenced in the case of the game’s plot, and I touched on initially, Dig 2 draws upon established games, including of course, past games in the SteamWorld franchise as well as established gameplay practices that have made recent 2D platformers like Shovel Knight so incredibly successful. Dorothy’s toolkit is nice and wide, providing players with a variety of ways to effectively traverse the terrain. As the game went on I found myself exploring new methods of transport, particularly in areas I’d already been through, and it was great to tackle these areas in new ways, whilst also using those new tools to uncover new areas and hidden collectibles. Thoughts on the different tools available to you?

Matt: I thought they were a nice solid collection of gaming gadgets, some predictable and some less so. The introduction of the Jetpack in particular freed up exploration. Now I played this on the Switch and never once on my TV. The game felt wonderful as a portable experience and it suited the nature of Ninty’s latest system perfectly. The game is the very definition of pick up and play, with the controls, feel and systems all feeling instantly accessible even if there was a long time between game sessions. Paul, you played on the Sony systems, how did it hold up on the big screen.

Paul: I did play both the original, and Heist on the Vita and I wholeheartedly agree with the point that these games are wonderfully suited for portable platforms like Vita and Switch. That said, I did play Dig 2 on my PS4, and I feel it wasn’t a lesser experience because of it. I typically struggle to commit to big binge sessions of any game (except perhaps Pokemon) on a handheld, the rare exception to this rule was the original Dig, but even that was because I played during a 14-hour long flight, so I didn’t really have an alternative way to play. Dig 2, to its credit, elicited one of those ten+ hour-long sessions from me, with only food/toilet stops as well as one brief pause to move the Playstation into the bedroom so I could continue playing into the wee hours, to break it all up. The hook of the game is such a simple one, and the mechanics are so solid that I felt there was always a carrot dangling in front of me, so just when weariness was about to set in, I suddenly felt a second wind kick in and suddenly a few more hours had passed. I know of some who completed the game in sub-seven hours, but I was taking my time, extracting every mineral from the ground, and constructing a beautiful mine that had accessibility underpinning it. Time flew, and it wouldn’t have mattered whether I was playing the game on a handheld or a console/PC; I was hooked.

Matt: Time flew alright, perhaps a little too quickly. If I have one beef with the game is that it felt a little short. I finished the game in about 6 hours at about 60% completion. As it ended I felt very hungry for more, which is a good thing, but at the same time the story does end rather suddenly and there was certainly room for more before it wore out its welcome. But otherwise, I really can’t fault anything with the game. It takes the very solid first title and improves on it in almost every way. Steamworld Dig 2 isn’t a revolutionary title but it is an incredibly polished Metroidvania game that deserves attention from anyone who has enjoyed that style of gameplay before. Paul, your final thoughts?

Paul: I’ll agree that the game did certainly come to an abrupt end, but the game continues to deliver well beyond the completion of the story. I’ve derived a great deal of enjoyment from trekking around the many branching mines and digging out every collectible and unlocking every upgrade/mod. It’s a massive testament to the quality of the game and the brilliant design by Image & Form. Absolutely one of the finest games of the year.

Matt: Saying any game is one of the finest of the year 2017 is a big call, but it isn’t out of place here. It comfortably stands with 2017’s elite and in the realm of the $20 – $30 indie title it is fair to say Steamworld Dig reigns supreme. Now Image & Form, I believe the Switch would enjoy some Steamworld Heist love if you know what I’m saying.