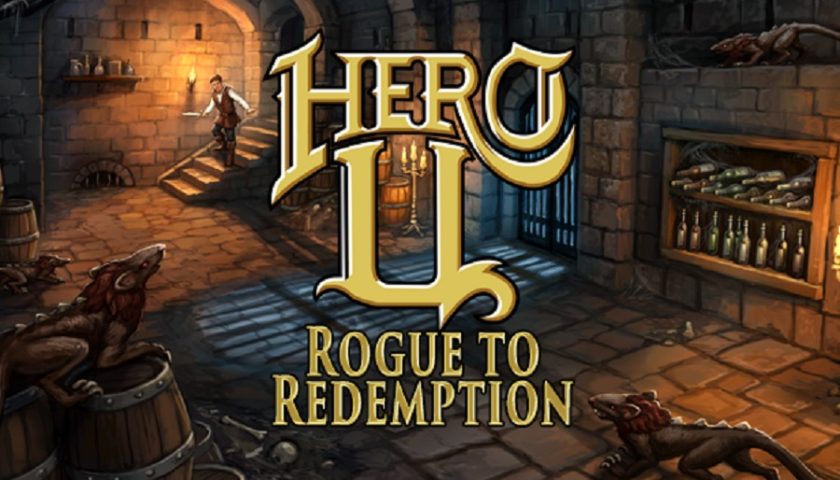 Hero U: Rogue to Redemption – A New Adventure in a Nostalgic Genre

Some of my earliest and fondest gaming memories involve Sierra adventure game quests. I can still remember playing the original King’s Quest in glorious CGA on my friend’s computer in the early 80’s. It was not only the novelty of colour in a video game but the way I could play a character inhabiting a world populated by creatures and characters from fairy tales. King’s Quest was, for me at least, the first of many great adventure titles. I enjoyed travelling to far off planets with Roger Wilco, bumbling space janitor cum adventurer; I pulled my hair out in frustration navigating the roads and puzzles in Police Quest and sniggered at the lewd jokes and situations in Leisure Suit Larry’s risqué adventures. Such was my love for the Sierra games I also bought some of their less well-known titles. I piloted a submarine in Codename: Iceman, a game I both loved and hated for its various mechanics. I was King Arthur in Conquests of Camelot: The Search for the Grail where I jousted with the black knight and eventually found the Holy Grail. I even played the Sierra game version of the Disney classic, the Black Cauldron. I think that was my sister’s game, however, and I don’t recall finishing it.

Of all the Sierra games I played my favourite were those in the Quest for Glory series, starting with Quest for Glory 1: So You Want to Be a Hero. This game caught my attention as soon as I saw in the shelf, with its golden-haired hero facing up against a red dragon, reminiscent of the red dragon on the original Dungeon and Dragons basic manual (for those know their 80’s era D&D reference book covers). QFG1 mixed up the adventure genre in a way I had not seen before. I was a type (and later, point & click) adventure game, but it was also an RPG, where you could choose your character statistics, skills and class. It presented the player with a decent sized game world in the valley of Springfield that had to be explored to find areas of interest and advance the quest. The different classes and skills meant that you could approach the game in different ways. Up front and with brute force as a fighter, sneakily as a thief, or obliquely as a magic user. You could also mix up the skills. If you enjoy swordplay and fireballs, you can be a warrior mage. Anyway, without going into an entire of that game, let it suffice to say that it blew my mind and played it several times to experience all the classes. Subsequent games only improved on the formula introducing new locals (Arabian nights, African Savanna), new classes (Paladins!) and a more solid experience all round. The creators behind this magical series were husband and wife Corey and Lori Ann Cole. Unfortunately, after Sierra’s demise, the chance of more Quest for Glory games seemed a distant dream.

I’ve often thought to myself, “It would be awesome if the Quest for Glory series got a remake”, and apparently I was not the only one. Hero-U: Rogue to Redemption is basically the spiritual successor to the Quest for Glory series. Lori and Corey Cole are once again responsible for the bringing the game to fruition, through two Kickstarter campaigns and a heap of hard work. At this stage, you’ve probably figured out that I am quite positively biased towards their work. So, did Hero-U live up to my expectations? Press on, gentle reader, and all shall be revealed.

Hero-U is an interesting mix of game genres, and as I started the game I realised that it was not quite what I was expecting. It still retains its adventure game roots with exploration, item collection, and puzzle solving. It mixes that with RPG staples like character statistics, adventuring equipment and choices, but it places these elements in a seemingly rigid school setting and timetable structure. As the protagonist, Shawn O’Connor, I had to attend lessons and train my skills to be the best rogue I could be, all while saving the world (well, the world being the university, in this case). There are other character classes featured in the game lore and story, but Rogue to Redemption focuses its attention on thieves and their ilk.

It took me a while to work out what the game really expected of me to succeed. I think I’ve become a little used to games that just tell me what to do, and where to go to succeed. Following the teachers’ rules in Hero-U is not the way to get ahead. Instead, this is a game where I really needed to explore and experiment. The game doesn’t do any hand-holding. I had to absorb any instructions given and figure the rest out for myself.

In terms of gameplay, each day starts in Shawn’s classroom and summarises the day’s lesson. I found I had to actually take note of these, as the game tested my knowledge with some tricky multiple choice questions during exam times! After class is out I had from 3 pm game time until the 6 pm dinner break to improve Shawn’s skills, explore the university or complete plot related quests. After dinner, Shawn has from 7 pm until curfew at 10 pm to complete additional tasks. Of course, who obeys the curfew, but Shawn becomes exhausted and heads to bed at 1 am regardless.

My free time was spent building relationships with classmates, training key skills, such as throwing or climbing or perhaps clearing the cellar of rats for some extra spending money. Hero-U has a lot going on, but there were still times where I just wasn’t sure what I was meant to be doing. The game isn’t really forgiving in those situations. There were a few instances where quests were solved by Shawn’s classmates because I had been wandering around exploring. So despite having a lot of freedom, the game does have expectations of the player. Basically, there are milestones I needed to achieve, though there was some flexibility in how I achieved them.  I don’t think this style of game will appeal to everyone, but I did enjoy it figuring out what was expected of me, even it meant occasionally reloading an earlier save game.

Hero-U’s art style looks like a shinier version of how I recall the Sierra quests looking. A lot of detail has been put into backgrounds and the environment, although they are mostly static. Shawn, his classmates and other characters are well drawn, although they do sometimes move awkwardly. The running and sneaking animations look a bit odd to me, but ultimately don’t really detract from the game. The world itself does seem quick sparsely populated, and though the game does explain early on that other students avoid the rogues, university definitely seems desolate unless you’re in specific rooms where classmate events are occurring, such as the classroom, training area or games room.

The combat is system is a turn-based system where Shawn can attack with his dagger, throw ranged weapons or use items such as potions, pills or traps. It’s relatively basic, but it does the job. The point is also made that rogues are not warriors, and by that standard Shawn did ok. Most of the time I found it was easier to sneak past enemies to avoid an untimely death. Later in the game, once I had upgraded Shawn’s gear, enemies became more manageable. Shawn can also be equipped with a range of clothing, armour and alternate daggers in a paper doll screen, but unfortunately, these changes don’t show up outside of the inventory screen.

Hero-U also includes a relationship system where players can have Shawn try to find a romantic interest from among his classmates. I was able to have Shawn flirt with some of his teachers, the cook and the secretary as well, but ultimately they spurned any serious romantic relationship with him, which is probably just as well. There are both male and female romance options among Shawn’s classmates and relationships are advanced by speaking with characters, choosing appropriate dialogue options and plying them with gifts they like.

I completed one and a half play-throughs of Hero-U. My first go finished in failure with an unsatisfactory ending for Shawn. While the ending could have been worse, I decided to reload an earlier save so I could properly complete a major quest I had missed to get a better conclusion. Both endings presented a few summary images and text and left me feeling a little flat after what I had been through. There is still a lot of the game I haven’t seen. There are some major choices in the game that really affect the Shawn’s approach to his adventures. For example, I had to select an elective for Shawn early in the game. I was able to choose from First Aid, Science or Magic. Skipping electives altogether was also an option. I selected First Aid which allowed me to identify mushrooms I could use in pills and potions. Even relationships are not certain, as one of the romantic interests was snagged by another NPC, so I imagine some specific work would be needed to win her heart.

Hero-U has a lot to offer, wrapped up in an old-school style package. If you enjoy working things out for yourself and carefully exploring game worlds, I think Hero-U will be rewarding. You also need to enjoy puns; Lots and lots of puns. While it has some slow stretches and can be a little intimidating sometimes, I think this is a decent game, and I’m glad it finally saw the light of day. Rogue to Redemption is apparently the first in a series that will see players getting to try out other characters classes, such as mages and even paladins, so I’m looking forward to the next one.