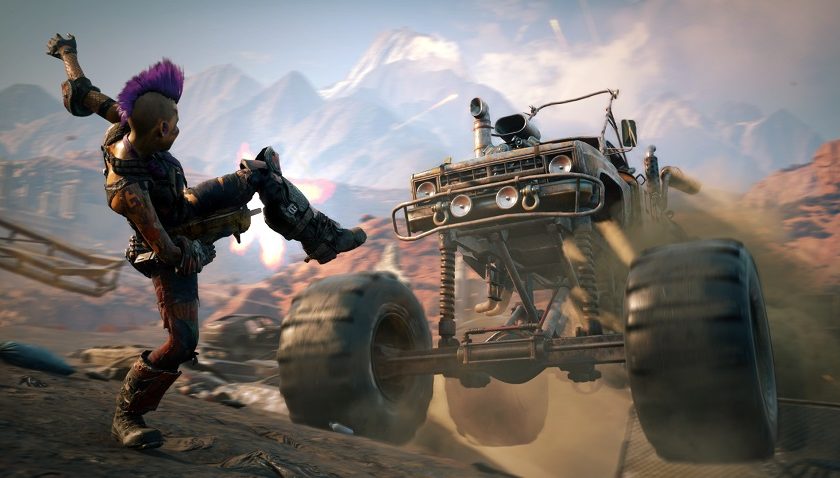 To say that RAGE 2 is a surprise is underselling it. No one saw a RAGE sequel coming, I don’t think anyone even believed the leaks. So when the game was announced it felt like a true shock to a community that is used to guessing secrets and knowing about games long before they are announced. So now we are over the disbelief and onto the important things like how does it play? Well thanks to PAX AUS I was able to get my hands on a healthy demo to get my head around what the game is actually going to be like.

The demo we played was the same you may have seen in gameplay footage previously, that said playing and watching are two different things. The first impressions the game gives off is one of speed. This is a fast game and movement is key to victory. Staying still is a sure fire way to get killed. In this respect, it feels very similar to the recent Shadow Warrior games or even Bulletstorm. Moving, leaping, dashing and a combination of the three are the best bets for controlling an area full of aggressive and tenacious enemies.

Speaking of enemies, I feel like this is the one area of the game that has been really taken from the first game. The way the enemies move and lurch feels reminiscent of the first title and considering enemy AI was probably the best part of the first game that is a good thing. Gunner enemies use cover effectively avoiding sustained blasts and melee enemies weave and leap their way towards the player, avoiding gunfire and obstacles. These are not target dummies that move blindingly towards death, they feel like engaging combatants that will put up a fight to their last breath. It makes for some intense combat that had me gripped from the first bullet.

I got to play with a few different weapons in the demo. An assault rifle and a shotgun were the primary methods of death and destruction. Both felt a little underpowered though, which I feel is an indication we will be able to upgrade weapons in the main game. There were two throwable weapons, grenades and the returning wingstick. The wingstick was particularly satisfying with the ability to target enemies and throw it around cover. Finally, there were four different special powers to play with. The first a simple dash, the second a juiced up melee attack that obliterates any enemies directly in front of the player, the third is an AOE attack that knocks surrounding baddies on their butt and finally there is a move called overkill. This move supes up weaponry and encourages players to run into the fray, dealing death with every bullet. It is a lot of fun to activate and I am sure it will be of great use in getting out of a tight spot in the full game.

What I saw of RAGE 2 left me with two conclusions. The first is this game is mental, fast and seemingly a whole lot of fun. The second conclusion is that I want to play more of this game right now. RAGE 2 feels to me like Wolfenstein: The New Order. A game that people weren’t sure about and didn’t have high hopes for. Let me tell you, RAGE 2 is looking great and just like Wolfenstein, I think it is going to surprise more than a few people out there.