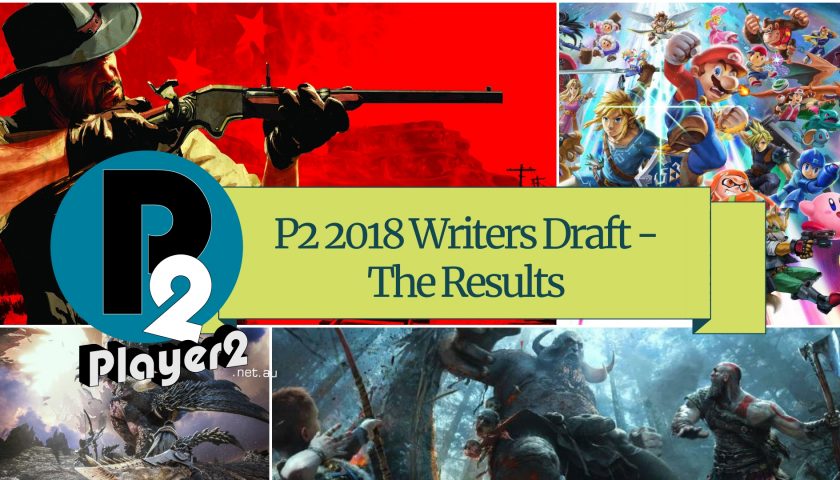 The race for the top prize (we don’t actually award a prize… but maybe we should?) has been won in the Player 2 Video Game Fantasy Draft for 2018. The winner was our beloved Adam Rorke with some exceptional selections. Read on for the final scores, and the closing thoughts from each contestant regarding how their drafting fared this past year before we again gear up for the 2019 edition. We’ll begin proceedings with our 12th placed competitor.

When the scores were initially released to the Player2 team I was sitting on a big fat 0. It was only after I remembered that the sadly forgettable Darksiders 3 DID actually come out in 2018.

That gave me at least one score on the board…

Well with Adam taking the crown I’m clearly the loser out of the Rorke’s in 2018. But at least I’m not the looser overall so I’ve got that going for me. Not a single one of my risky picks paid off this year, who would have thought picking a game without an official title wasn’t a great idea? But the thing that disappointed me most is KH3, I mean come on Square, a January 2019 release? Surely this is a personal slight solely designed to make me look foolish on the internet. If only I got to carry the unreleased games over to the next draft!

This time last year I was lording my narrow victory over Adam and now that has come back to bite me majorly – would a 130pt difference count as a landslide victory or a mere shellacking?

Either way, I’m reasonably pleased with the performance of the games I picked – at least, those that performed. I knew Days Gone was a bit of a gamble when I chose it, but the 2017 draft had left me cocky. Dragon Quest Builders 2 was also a bit of a foolish choice in retrospect, given the western release is always later than the Japanese, which only just squeaked it in for 2018.

A Way Out and Donut County were both solid little performers (and great fun, from the very little I played of each) but The Inpatient dragged that average down a lot. I never got a chance to check this out beyond the trailer at E3 2017 (which informed my choice as a draft pick), but it seems to have gone the way of VR in general – promised the world and then severely underwhelmed.

I think I’m going to take 2019 to lick my wounds, find my footing, centre my chakras and balance my chi – watch out Player2 2020 Draft, Stevie will be back!

Only having three out of five of my picks actually come out certainly didn’t help my chances this year, but that’s what this competition is all about – a big gamble could pay off. Of my three, I’m happy with how SotC scored predictably high, but then my hopes for The Crew 2 to actually be, you know, good, were dashed. And Kirby, well, 73 just isn’t going to cut it as one-third of a sword swing, is it?

Oh well, I’m sure Tsushima and Yoshi will probably come out to rave, 90+ reviews and I’ll be grinding my teeth in frustration. It’s nice to know that this industry can still be turbulently unpredictable at times. Congratulations to the winners. I can’t be bitter because I actually had pretty good draws this time – I just wasted them. Sigh!

So another year, another middle of the pack performance. I feel like I did pretty well though and if Metro or Super Meat Boy had hit their original release dates I would have been right in it. Sadly though that wasn’t to be and with State of Decay 2 not hitting with critics (I personally loved it) it was always going to be a hard slog.

Hopefully this year I don’t get stiffed with the draw order and can get the picks I am actually after and not ones I am forced to hurriedly research.

After looking over the results, it’s clear that 2018 was a big year for delays and wishful thinking on the part of some of our writers. Taking 4th place with two of my picks (Psychonauts 2 and Crackdown 3) failing to appear isn’t a total wash, but it does make me think we might see a few people playing much more conservatively in the 2019 draft. While Monster Hunter World and Dragon Quest XI did about as well as I thought they would sitting at 90 and 86 respectively, I was a little surprised that Vampyr wasn’t more warmly received, sputtering in at 72 – a respectable score, but one that might have been pushed higher had it too seen a delay. Looking forward, it’s now time to cobble together a shortlist of titles and hope that RNG favours me out of the gate for the next draft!

Another year, another Player2 draft to look back on and lament at just how bad some of my choices were this year.

Lets start with the bad and work up, shall we?

Well, The Last of Us 2? More like THE LAST DAMN TIME I’M GONNA PICK THIS IN A DRAFT. It’s 2019 and we still have no concrete word on a release date for this so to them I say… well, nothing I can say to our family friendly audience,

My one saving grace this year was Soul Calibur VI and it’s bloody awesome character creator of god tier ridiculousness. When the people of the internet get together and create an entire reddit thread dedicated to creations coming from your character creator, you know you’re doing something right. Unfortunately, that wasn’t enough to save me, and thus ends my draft experience for 2018.

But time marches on and so I enter 2019 the same as I enter every year: mildly pissed off, bitter and a little bit drunk.

So…that sure was a thing that happened, huh? 2018, that is! From the off I knew my chances at Player 2 Draft success were slim. Partially because the big names had all largely been claimed, and partly because, well, how could I resist the follow-up to Sunless Sea, Rare’s seafaring Saturday morning cartoon return, or the most interesting take on the Souls formula since…well, the Souls games themselves?

Was it a winning strategy? Unlikely. But was it decidedly “me”? Definitely. Looking back, it turns out the riskiest pick of all – met with shock and awe among the crew at the time – was actually my safest and best-performing bet: Super Smash Bros Ultimate.

Elsewhere? The scores of my remaining picks reflect much of what 2018 would become as a whole both professionally and personally: middling, imperfect, and nothing if not captivating. But do you know what? In hindsight, I likely wouldn’t have had it any other way. Spit and polish are all well and good, but give me the turmoil and tragedy of Sinner or the pure, unbridled joy of Rare’s piratical simulator any day.

In retrospect, ready to set sail into the sunset in search of a better year, I’ve come to a few conclusions: scores are meaningless, there’s nothing wrong with liking the games that you like, and more often than not there’s something truly genuine to be found within the rough edges of tough experiences. Now if you don’t mind, I’ll be leaving with this glinting gold bronze third-place trophy and more than a few treasured memories as I plot a course via the stars to calmer seas ahead. Care to join me?

It’s another year of close but no cigar for myself this past year with the Player 2 fantasy draft. I always manage to grab a few big winners, but through delays, I end up dropping just short of the win. This year I thought I had the whole thing in the bag with Red Dead Redemption 2, Spider-Man, NBA 2K19, Ori & the Will of the Wisps and then, of course, Kingdom Come: Deliverance as my Wildcard. Well Red Dead delivered the top score of the year, Spider-Man was sensational and NBA performed as I expected it to. What I didn’t count on was for Microsoft and Moon Studios to not have Ori ready until this year! Couple that with a Wildcard that didn’t deliver like its name suggests and all of a sudden I’ve pulled a 2016, a year where I had a tonne of the top scorers and still failed to greet the judges. SURELY 2019 HAS TO BE MY YEAR!!!

Someone asked me a question, “are you surprised that you won this year?” I started laughing and after a good 17 minutes I stopped and said “was Einstein surprised he was a genius?”, ahh yes, good times. Well, it does look like I have bragging rights around the Rorke household for a while (or at least long enough before it gets me in trouble … so a good 3 days at least). It’s only going to get worse for you all from here on out, Paul was way too close for comfort in 2018, I need to get some better picks to have a comfortable first place next time! Let’s go!

So with that, the 2018 Player 2 Video Game Fantasy Draft has come to a close, but stay tuned because the 2019 edition, with some new faces joining the fold is nearly upon us!