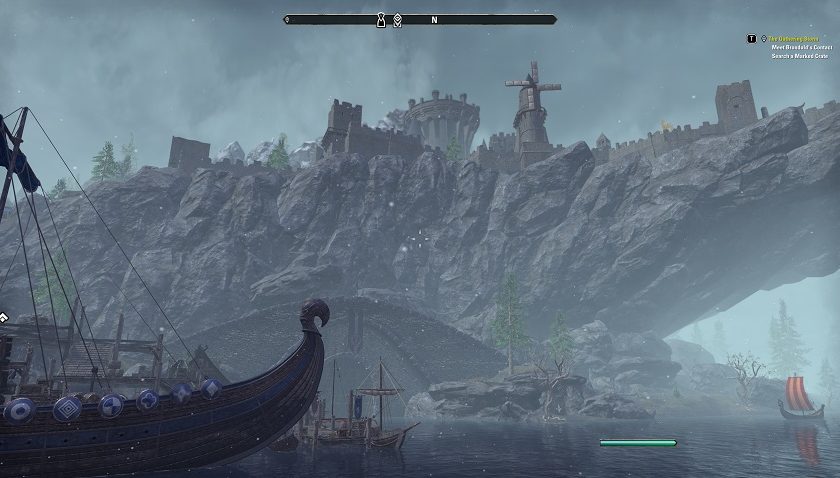 MMO’s are huge, expansive experiences that take a massive amount of time to explore and engage with. This leads us to the current situation, with a large portion of the population in isolation, now is the time to dive into something this grand and that is exactly what Matt decided to do.

Elder Scrolls is a name that has a long history in gaming, yet like a lot of people, my main interaction with the franchise has been with a little title called Skyrim. Sure I dabbled in some Morrowind and Oblivion, but it wasn’t until Skyrim hit that I really immersed myself in the series. At this point in time, thanks to releases on the PC, Xbox and Switch, I have probably spend hundreds of hours exploring the snowy, Nordic region of Skyrim. So when it was announced that Skyrim was going to be the location of Greymoor, the latest expansion for Elder Scrolls Online, I knew I had to check it out.

Using my low level (26) Elven Scout, I fired up the expansion and was immediately greeted with a familiar sight, the Town of Solitude. This town featured prominently in Skyrim, so it felt like a smart choice by the developers to kick things off here, giving out those nostalgia fuzzies in the process. Finding the main story quest-giver, I launched into my journey through this familiar place, but before long I was greeted by some massive surprises. The story is set around a Vampire coven. This coven is being a generally nasty bunch and stopping their mischief was my primary goal. They have been summoning mindless slaves, murdering the population, assassinating queens, pretty standard stuff for a bunch of undead bloodsuckers. In grand RPG fashion, it was up to me to stop all of this tomfoolery and kill a whole bunch of werewolves, skeletons, spiders, crazy cave humanoids and, of course, Vampires. I am actually quite enjoying the story. Sure it isn’t anything particularly new, but it is told well and the stakes (sorry) feel appropriately high. On more than one occasion I lost track of time following this new quest, so intent was I in solving the mystery surrounding this group of nasties.

Perhaps the high point of the whole quest, however, was the introduction of the underground realm, which includes Greymoor. Not seen in Skyrim, Greymoor and its underground surrounds are what remains of an ancient Dwarven underground society that has now been inhabited by miners, clerics and the undead. It is, in a word, stunning. One of those moments in gaming when you have to just stop and slap that screenshot button. It is a wonderful mix of Dwarven architecture, ancient castles and slapdash additions from the most recent occupants, all surrounded by stunning cave systems that are lit in a riot of colours thanks to luminescent fungus and dazzling crystal formations. Honestly, in my time with ESO I haven’t seen anything that approaches Greymoor in terms of look or ambience.

Gameplay-wise, there have been a few new additions to ESO thanks to this expansion. As far as group activities go, the Dragon attacks from Elsewyr have been replaced by blood storms. These massive group battles have two stages to proceedings. The first requires combatants to take out three pillars that are protected by a range of undead baddies that all do significant damage. Once those pillars are destroyed a Vampire Lord is summoned and the real battle begins. This nasty bugger can take out a lower level character like mine with one hit so there is plenty of dodging and sprinting going on, making the battle much more mobile than the dragon battles of the previous expansion. I love taking part in these battles. For a primarily solo player, they are a wonderful reminder that the game is inhabited by a massive amount of players and when they work together, it is extremely satisfying.

Other new additions include the new archaeologist skill and associated activities, which Joab Gilroy has detailed for Player 2 previously and a range of new pets, mounts, costumes and enemies, all the things you expect from a big expansion for what has become one of the worlds premier MMOs.

One thing I discovered which improved my enjoyment of the game overall was the fact it includes a controller mode. You see, when I first installed ESO, I picked up my controller and it didn’t automatically work, so I made the assumption that the PC version didn’t support controllers. Apparently I was wrong because after spending some time digging through the settings, I found a way to activate the controller. Why would I want to use a controller in an MMO, I hear you ask? Well, some of you may know already, but I have constant problems with the nerves in my wrist, so using a keyboard and mouse for a long period of time causes me a significant amount of discomfort. The ability to use the controller has transformed my enjoyment of the game, which by the way works exceptionally well with this control method. I would even go so far as saying that while in controller mode, the game is better because of the cleaner, more accessible menus and the mapping of attacks and abilities to controller buttons, but that is probably just a matter of taste. Either way, it is a win for accessibility and probably an indication I should look at the settings in games more closely before I make assumptions.

So I guess I can say that my feelings towards ESO are still almost overwhelmingly positive. As of yet, I haven’t given much thought to joining in on raids and the like, simply because there is so much to do as a single player. But I do intend to remedy that, so you can expect another episode of “Isolating with ESO” then, in the meantime, know that Greymoor is perhaps the best reason yet for Skyrim (and other Elder Scrolls single-player games)  fans to give ESO a crack. There is a wonderful mix of the familiar and the new that makes exploring this region a joy. This means that even eternal MMO ignorers should consider giving it a go. I feel confident in say that you won’t be disappointed.