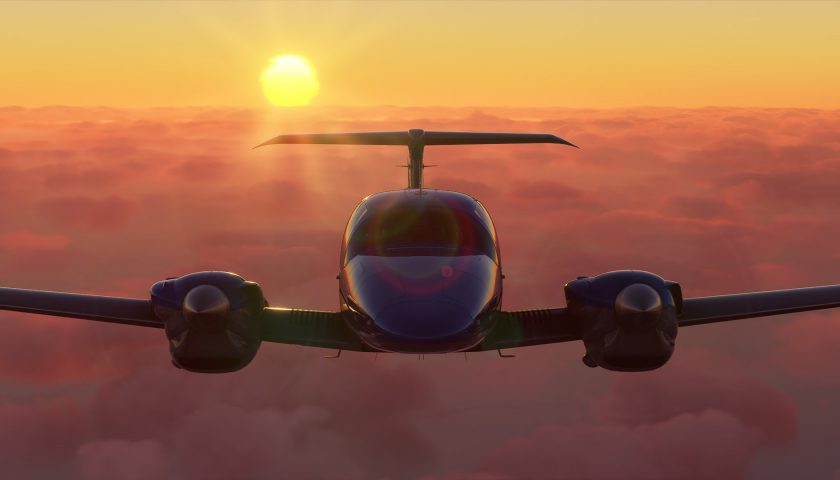 Pilot’s Log – Flying around the World in Flight Simulator

Microsoft Flight Simulator might be the most incredible and awe-inspiring technical achievement I’ve experienced to date. It’s so much more than just a flight simulator – it simulates the Earth to mind-numbing levels of detail, combining AI technology that helps render buildings and configure terrain scale and height, with existing satellite imagery and photogrammetric data to build a pretty damn convincing virtual replica of our planet. And its effect on me was near immediate.

I’m not a pilot. I don’t like the physical feeling of flying because I suffer from terrible motion sickness. But there’s something undeniable about the feelings that well up inside when seeing things from that perspective, tens of thousands of feet above the ground we walk every day.

Not to wax lyrical on the subject, but I felt genuine inspiration at being able to take off from my local airport (which also happens to be an international one) and fly a couple of hours north and see almost all of where I grew up–the house I grew up in on the Central Coast of NSW, my parent’s homes, and the place I lived in Port Macquarie for several years are all there to see. And I did it all from the comfort of my sim rig and PC at home. It was astonishing.

So inspiring was it that I’ve decided to take on the arguably ridiculous challenge of circling the globe, flying over or to as many locations as I can in the process. All in Microsoft Flight Simulator.

We’re going on an adventure!

So how am I going to do this? The plan is pretty simple; see as many places as I can, keeping heading in a generally west direction and we’ll see how I manage. I’m already four flights down; starting out in Sydney and heading for Auckland, then I did Auckland to Queenstown, Queenstown to Hobart and Hobart to Melbourne. From there I’ll make my way towards Perth, up the west coast of Australia towards Darwin, and then off towards West Papua and Indonesia.

I won’t be using any flight assists but will be using live weather, air traffic control and live traffic all in a bid to help make the journey as reasonably realistic as possible. I did play with having failures turned on but every time I did the plane would spawn into the world with its engines smoking more heavily than an angry Mount Fuji, so that’s off the cards, at least for now.

While It’d be relatively simple enough (and kinda droll) to pack a load of fuel into a 787 and circle the globe, that’s not what I’ve elected to fly. I’ll be doing the trip in something much smaller and trickier to handle; a small, twin-propeller beast known as the Diamond DA62.

The DA62 is small in size, but it’s fast and it’s got a good field of vision so I can see out of it easily. It’s also got two large main and auxiliary fuel tanks which we’ll need to get across some of the larger ocean gaps. In some ways, it feels like the difference between touring somewhere in a bus versus on a motorbike. Sure, the bus is bigger, faster and more comfortable, but it can go fewer places, and you’re not able to experience the ride the same as you could on a bike.

And what do I get out of this? Well, nothing aside from my own self-satisfaction, I suppose. Look at it this way, I’m never going to get a pilot’s licence and fly around the world, and I’m never going to see most of these places anyway. But what a way to experience a slice of that feeling of adventure. Also, as someone who unashamedly enjoys staring at maps and learning about places, what better time to look up the history of the places I’m “visiting” by learning a little bit about them along the way.

I have no idea how long this will take me to complete, I suspect at least a year or two given that I can’t do this non-stop. But that’s also part of the fun; there’s really no time limit on me here. I can persist at my own pace and stroll from airport to airport whenever I please, which frankly makes me so much more excited about the whole thing.

The journey so far…

Flying direct out of Sydney to Auckland was my first flight on this epic journey, and also my very first international flight on Microsoft Flight Simulator. In a big jet it’s about a four-hour skip across the pond, but in my much smaller, lighter plane I knew it would be a big test of the aircraft’s fuel mileage and resistance to cold weather off the bat. Thankfully the weather wasn’t much of an issue outside of a strong headwind that made it very difficult to hit the fuel number needed to make the full distance. But we got there with only a sniff of fuel at the end.

Auckland to Queenstown was a much bumpier ride and doubtless would’ve had me reaching for a doggie bag. Queenstown’s approach was a surprising highlight given I learned only ten miles out from the runway that it happens to be one of the most dangerous approaches in the world. The turbulence coming off the mountain ranges below combined with how quickly you need to descend to make the runway safely had me asking for emergency services to be deployed to the runway just in case. But we made it down safely

The third flight was easily the most challenging, with the plane completely icing up on the climb out of Queenstown, making the next few hours of dodging giant cumulonimbus cloud spires at 20000 feet while trying to clear the ice that had formed on the fuselage a truly harrowing, but ultimately rewarding experience. As we descended into Hobart we were greeted with the most incredible sunset view. It was a perfect reminder of why I wanted to do this in the first place.

Hobart to Melbourne was mostly a sightseeing tour of Tasmania before struggling to find the runway through the thick clouds that were hovering over Melbourne that day. Melbourne to Adelaide, flight five, promise’s much of the same. Hopefully, it’s a nice, short flight over rural Victoria and South Australia that will pay off with some incredible views of Australia’s southern coastline.

Be sure to follow the flight threads on Twitter by following @flightsimjim026 and the hashtag #aroundtheworldinMSFS. You can also catch regular written updates here on Player2.net.au, along with some of the best screens from the trip so far.