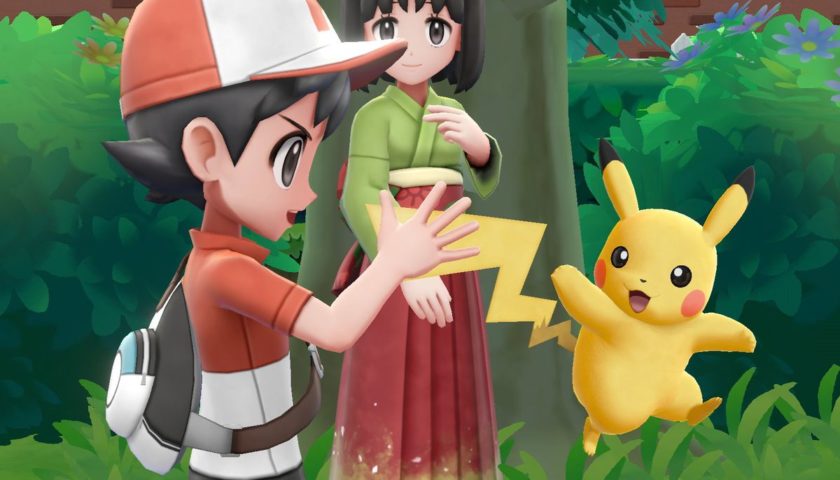 It is that time of year, time to pick those titles that deserve special mention. It is time to highlight those games that grabbed us, disappointed us and surprised us. Welcome to the Player 2 End of Year Awards. First up, 2018’s Surprise of the Year.

Arguably my game of the year, Celeste, came as a complete surprise. Occasionally, you play a game that you know nothing about and it totally blindsides you with its quality. In this case, Celeste is that game. Having not followed its development whatsoever, I had the pleasure of reviewing Celeste for Vooks at the start of the year. To my knowledge, it remains the only perfect score I’ve ever given.

Earning a gong at The Game Awards for Best Independent Game, Celeste deserves every accolade and acclaim it receives. Play it if you haven’t already. Play it again if you have.

My surprise of the year was more of a personal one, and not so much an “I thought this game was gonna be crap and it was actually good” surprise, and it’s the new Pokemon title: Let’s Go: Pikachu.


1) It surprised me how many people picked Let’s Go: Eevee, because who actually cares about Eevee when they don’t evolve but ANYWAY…

2) The real surprise for me was how much I still enjoyed this game that I’ve essentially been playing once a year since I was 8. The nostalgia it brought back was fantastic, and even though they’ve changed the way some of the core mechanics work (no more random encounters!) I found this fresh take on an old franchise utterly enjoyable.

I have to be honest, I didn’t see God of War being as good as it turned out to be. I was done with Kratos, I was happy to let brutal murderous Gods lie and playing the God of War III re-release on PS4 only confirmed that for me, the gameplay and story both felt like relics of gaming’s past. So when then new and improved Kratos hit, I was blown away. This isn’t just Kratos grown up, this is action/adventure gaming at its best.

What surprised me the most with God of War wasn’t the excellent action or the amazing graphics. What surprised me was the subtlety and restraint shown in the story. My single favourite moment of the game is a quiet one, with Kratos heading back to his cabin to retrieve *SPOILERS* the blades of Chaos *END SPOILERS*. It was beautiful, Kratos, struggling with who he was and who he has become. Excellent storytelling in a God of War game, if that isn’t a surprise nothing is.

I’m kind of grasping at straws for this section – I could double up on God of War 2018 given that I would have never thought in a million years it would end up my GOTY, but that feels a bit like cheating. What has instead surprised me (and clearly some developers and PR) is how packed the final quarter of each year continues to be in terms of releases. While Hitman 2, Darksiders 3 and Just Cause 4 all reporting soft sales doesn’t surprise me in the least, what does is the fact that they would all be released so close to much bigger titles like Red Dead Redemption 2 and Super Smash Bros Ultimate. The honest truth is that very few people are in a position to pick up every new release, which means some must fall by the wayside in an industry that is completely obsessed with ‘the new hotness’. Miss that initial wave, and 9 times out of 10 you sink. I hope this is something that is given more consideration in the future, as it is a damn shame to see the hard work of developers go unnoticed in this manner and smacks of the film industry in regards to the death of the mid-budget film in favour of bombastic tentpole releases.

Merchant by day and bad-ass by night, that’s the simple arc that is Moonlighter, and that very simple loop was enough to have me hooked for a substantial period as I toppled down the well on this procedurally developed dungeon crawler. Procedural generation isn’t something that has typically retained my interest but the challenge of finding all the coolest loot during one night’s adventure, and then bringing my findings back to my store before attempting to find the perfect price-point to on-sell to customers, building my bank account to upgrade my gear and return to the dungeon was immensely satisfying. It’s one that has certainly slipped under many a radar, so consider checking it out!

God of War is a series I’m pretty familiar with and knew what to expect from a new entry, or at least, so I thought. This game was surprisingly nuanced with story and beautiful world building that I wasn’t really ready for in a God of War Game. Everything about it was fantastic for what it was and it delivered in ways I never expected. I also got to literally tear enemies apart with my daddy bear hands and the axe recall is one of the most satisfying feelings I’ve had in a game to date.