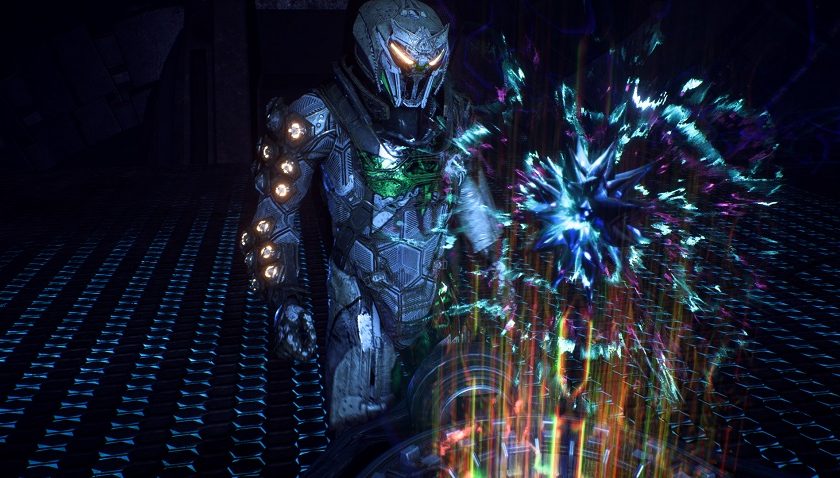 My journey through Anthem has been a strange one. As I outlined in my previous article, there are some serious cracks in the game. But the good news in the time between that article and this one, a lot of the problems have been resolved thanks to two major patches. These patches have reduced load times significantly, improved the mission selection UI and generally just made playing the game a much smoother experience. Props to Bioware for getting things sorted quickly without fuss, I feel safe in saying the game’s community appreciates it.

As for the game itself, now that it is all working properly I can focus on what does and doesn’t work within Anthem, and there is quite a bit in both of those categories. I want to start with my favourite thing about the game and that is the wonderful characters on display. This is truly where Bioware has a leg up on the competition, their years of RPG writing coming to the fore. Never in this genre have I actually cared about the characters in the world, they have always been convenient quest-givers and nothing more. In Anthem, the people that populate the home base are all wonderfully unique and engaging. I enjoyed every second of exploring the Fort, talking to the inhabitants and learning about their stories, problems and issues. There is the sad tale of an old lady who mistakes you for her dead child, the forbidden love of two people from opposing ideologies and even an awkward, yet amusing, safety inspector who just wants to make the Fort a safer place, one loose cable at a time. These story touches are in no way essential to the game and if Bioware didn’t include them, I wouldn’t have missed them, but I am so very happy they are here. It is the first time I have felt that a game in this space is actually approaching world building seriously, as opposed to slapping it in the game as an afterthought.

This leads into the game’s main story, which is just fine. It is in no way a groundbreaking piece of games writing but at the same time it isn’t the trashy story quite often served up in games. It fits comfortably into the “perfectly acceptable” category, never outstaying its welcome or overdoing the cheesier moments. There are all the story beats you would expect, a triumph against odds, a sudden betrayal by a close confidant, a revival of a destroyed friendship, it is all there. The great thing about it, however, is that Bioware has done such a great job with all the characters, that these familiar story beats are all enjoyable despite how many times we have seen them before.  The story finishes with a satisfying climax and just a little tease of things to come, which I felt was totally appropriate and something that was handled with care.

Now I have to mention the things that worry me. The missions themselves are, to put it bluntly, exactly the bloody same every time. This is the biggest issue I have with Anthem in general, I spend so much time doing the same things, my experiences seem to just blur and I can’t pick out many moments from the game. The one section of memorable mission design is a series of trials at about the story’s midpoint and the only reason I remember them was because they were set in an exciting new area, not because they did something new. Now I am into the end game this is going to be a problem of the highest order, as variety is what keeps players coming back for months on end and sadly, at this point at least, variety is what Anthem is lacking. Even the stronghold missions are pretty much exactly the same, just tougher. It is such a shame as a bit more variety would help players look past some of the smaller niggles that present themselves as more hours are poured into the game.

Those small niggles are things like clipping issues, the occasional crash and strangely not exiting to Windows properly. These things are hardly game breaking and to be honest, not that uncommon but they are noticeable over time and they show that Bioware still has some work to do on the back end of the game. Thankfully they have shown that they are quick to action when problems arise so hopefully fixes aren’t far away.

So far I am enjoying my time with Anthem, I cannot deny it, but I can’t help but think it has the potential for so much more. I am not planning on stopping playing anytime soon so I am going to report back once more, but I will say this, Bioware should be not resting on what they have produced. With The Division 2 around the corner, Anthem faces the very real danger of being forgotten without some additions and improvements. I hope for everyone’s sake that they are coming.